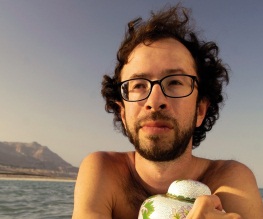 This fifteen minute film focuses on the character of Yasha. When we first meet him against the picturesque backdrop of the Dead Sea he is sitting at a bus stop with an urn in his lap, an urn that contains his mother’s ashes. He cuts an abnormally smart figure out in the heat at the beach and this formality seems to be a mark of respect for the sombre situation. Yasha or ‘Yash’ as he becomes known, seems stiff, expressionless and displays a very real sense of numbness appropriate to grief.

As Yash sits at the bus stop absorbed in his thoughts, his cousin Satub appears. He greets Yash casually and happily; making light of his appearance and jovially comments on how he appears ‘as thin as a rail’. Yash and Satub sit at the bus stop surrounded by an air of tension, as Satub’s frivolity is met with contemplative silence. Satub’s carefree nature serves to contrast greatly with that of our protagonist. The silence and awkwardness demonstrates the gulf between their two mindsets, emphasising both Yash’s heavy heart and Satub’s inability to find the appropriate emotion to properly offer comfort.

As Yash climbs up rocks by the beach in solitude, he surveys the landscape and sings a mournful song about an absent mother that we hear a refrain of several times throughout the film. As he sings the song, his almost complete expressionlessness is only broken by tiny facial hints of emotion. He seems almost to be willing himself to feel something. I think the film does well to represent the numbness of grief and the little rituals that people perform during the process of grieving for a lost loved one.

Upon Satub’s suggestion Yash decides to go into the sea. As he stands in the water a nameless girl wearing a white bikini swims into the scene, breaking the silence of his quiet contemplation. She is giggly and provocative and her encouragement of Yash to engage in such activities as floating on the sea and gazing at the clouds seems to force the point home that it’s permissible to enjoy your life, even through the process of grieving. He seems at odds with himself over whether to fully give in to her requests. Her whimsical nature and prominent placing within the series of events make her appear almost angelic.

This film has a certain sense of contentedness at its close. It’s a gentle and reassuring snapshot into the life of a man coming to terms with his grief. The film seemed to suggest that appreciating life is equally as important as mourning a loss. Touching but not over sentimental, Tolca Mama is a practical and realistic take on learning to let go.