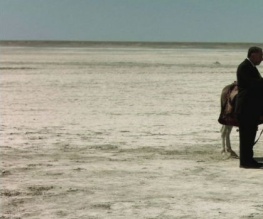 There is an inherent charm that goes with the idea of short films. They’re usually low to no budget, have a basic lack of resources and the general public never hears about them. Ever. Which is quite sad really because every now and then a short comes along that does what it intends to do brilliantly. That is, pass on a number of different powerful messages in a tiny amount of time. What About Me? is definitely one of those. The film begins with a young Israeli soldier, sitting on the desert ground with his guard dog at a military checkpoint. Enter an older man with a donkey. Immediately the young soldier bars the man’s path, asking for identification. The older man supplies his yellow pass but is refused by the soldier as today only purple passes get you through. “No problem”, supplies the donkey as he has one, and the young soldier waves him through his comical security “gate” (two slabs of concrete connected by a rusty chain in the middle of the desert). Intentional absurdity is the key phrase for What About Me?. This short aims to use arbitrary encounters between characters to highlight the issues present in the wider world as similarly redundant. The image of an unneeded military presence and the baffling colour passes cannot help but reference modern day Israel and the difficulties currently facing that political climate. These images are then beautifully tied together in the ending when both characters sit down in the desert – awaiting a change to there situation, hinting at the desire for change in reality. Whatever your interpretation, thanks to fantastic imagery, humour and blatant absurdity on display, it becomes easy to recognize the things What About Me? is trying to highlight and comment on. Definitely a great short for the attentive viewer.