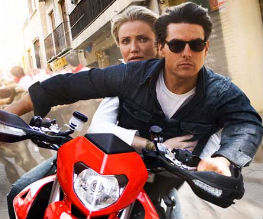 It Happened One Knight

The story – if you can call it that – sees rogue CIA agent Roy Miller (Tom Cruise) repeatedly bump into June Havens (Cameron Diaz) on purpose at an airport as he tries to flee his CIA buddies. Said CIA buddies are watching and instead of picking Roy of then and there, they inexplicably decide to wait until he’s on the plane – and just in case that was a little too believable, the CIA guys decide to put June on the plane too for no apparent reason whatsoever. ‘Comedy’ ensues as June and Roy trot across the globe as they try to clear Roy’s name and keep an everlasting power source out of the hands of the bad guys.

To say the plot is weak is an understatement. Of course, a poor story is forgivable in the name of a fun summer blockbuster, but Knight and Day sets the bar a little higher (or should that be lower?) for mindless action to a level that the likes of Van Damme and Segal could only aspire to. Whenever the plot sees our protagonists worked into a particularly tight spot, we literally black out and wake up somewhere else, often on a different continent. Why? Because whenever things get tough, Roy drugs June and conveniently does his superspy thing while both she, and in effect the audience are rendered unconscious. This happens with an alarming regularity, with barely a wink at the audience to acknowledge that the film knows how ridiculous this is. The film employs this same gung-ho attitude toward the many action clichés it strings together and calls a plot, thinking that if it treats tired old car chases like they are something new, the audience may actually forget that they’ve seen it all before. The audience doesn’t.

Oh, What a Knight

It is left up to the stars to hold Knight and Day together, which they just about manage to do, but not nearly as well as they should. Cameron Diaz is let down by the non-existent characterization of June. She is meant to be a regular girl who we can laugh at as she struggles to cope, but she is so hysterical and annoying, the viewer wishes that they too could just knock her unconscious. In the third act June manages to pull herself together, but the humourless squealing and pouting that went on before means her transformation is unconvincing. It is left to Cruise to charm the audience, which of course he does. Cruise appears to be the only aspect of this film with any self-awareness as he puts in a humourously knowing performance as Roy that verges on a parody of his action man persona. Together the stars make for a charismatic pair, but the love story element is cringeworthy and cheesily played. There is no romantic chemistry between the stars, who feel more like friends and lovers and I was thankful when they got back to running away from things as opposed to awkwardly flirting with each other.

Knight and Day should have worked – it had two charismatic stars, and an action-packed plotline that allows for plenty of comedy – but it doesn’t on any level. The action is fine, but there can be no tension when the story has been written so badly. The stars do their best but the romance element is unconvincing, and the comedy is either non-existent or just plain unfunny. Knight and Day was never going to be an actioner comparable The Bourne Identity or Wanted, but it at least should have been fun. Sadly, the laziness that permeates every aspect of this film – a laziness which revels in plot holes and wastes not only the excellent supporting cast but Diaz and Cruise – means that Knight and Day is only passable at best.

Previous: Film 4 FrightFest: The Final
Next: Step Up 3D 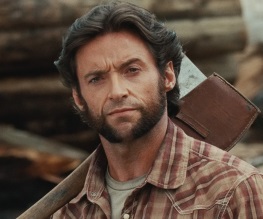