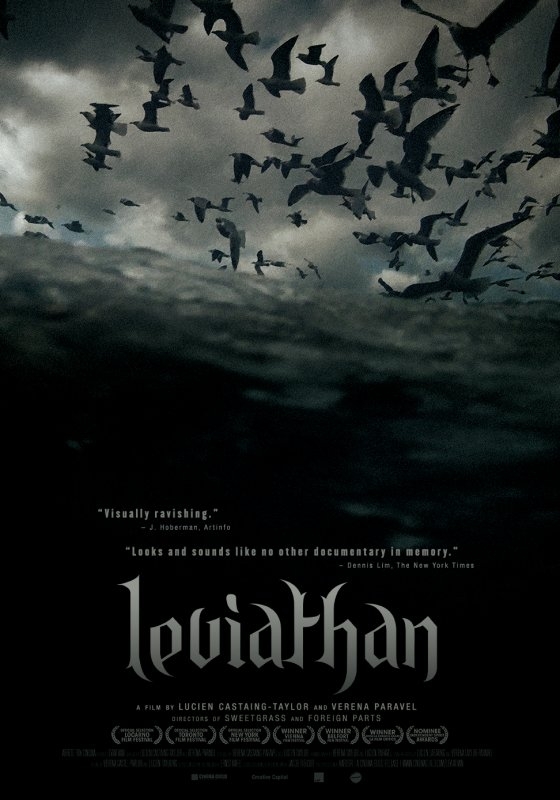 Leviathan is a documentary from Lucien Castaing-Taylor and Verena Paravel that depicts the world of the North American fishing industry. Except, it’s not really a documentary. There are no talking heads, no plot, no story, no characters, and no meaningful dialogue whatsoever. Leviathan is a purely sensory experience.

The many extended shots, some of which you can’t deny the power of even when you have absolutely no idea what you’re looking, render parts of Leviathan like being sucked into an elongated, bleak, briny and beautiful screen-saver. If you can’t see that as a compliment, then you may struggle with this one.

Using small, clip-on cameras to achieve all sorts of mind-boggling angles and perspectives, Leviathan loosely charts what happens on a fishing trawler. The fishing nets are pulled in; the fish are sorted and gutted; the waste and detritus discarded; the crew struggle on, and rinse and repeat. The toll that the job takes on the crew is obviously apparent in every crease of their weary, chain-smoking faces, as is the ethical and environmental ramifications of such an enterprise, but the film never explicitly pushes these points. It simply presents the reality – albeit warped through clever film-making into some sort of hallucinatory seascape – and allows the audience to make their own judgments.

It’s an oft quoted fact that we know more about outer space than we do our own oceans, and it’s an apt thought to keep in mind while watching Leviathan. While it never takes us deep into the ocean, it presents a totally alien environment. From the genuinely frightening, breathless midnight hauling of the nets out, to the incredibly powerful shots of hundreds – thousands – of fish slowly suffocating, sloshing back and forth on the floor of the ship, to the jaw-dropping and eerily beautiful shots of sea-birds hovering nearby to pick off an easy meal, make no mistake; Leviathan is a horror movie.

It’s unlike any vision of the fishing world you might have seen before, and it’ll certainly make you think twice before tucking into a tin of John West.

The sound design is purely diegetic, and is never less than astounding. The clanking and roaring of machinery at odds with the crashing of the waves and the howling of the wind creates an audible experience that makes you question what is what – and, ominously, which might be more powerful. As the camera dips below the surface, the inescapable sound of the rushing water, along with only fleeting glimpses of the surface and daylight above as the ocean roils around the lens, becomes suffocating; this must be what it is like to drown. The grime of the boat and the slime of the catch are tangible throughout, and it won’t take long before you start to feel weather-beaten and salt-encrusted yourself. Leviathan is an absurdly immersive experience.

It’s a film that puts you so deep inside the world depicted that it can be a hard watch. The directorial trickery places you variously as every aspect of the film. You take on the point-of-view of the fish, both before and after capture; of the gulls hovering hungrily nearby; of the crew doing their jobs; even of the boat itself (as if to reinforce this, the “cast-list” includes the Latin names of every genus featured – a nice touch). The grainy, point-of-view angles are an astonishing achievement, and no matter where you’re placed, the mighty ocean is always lurking on the fringes, implacable and intimidating; a force so powerful and capricious that it’s a wonder we go near it at all.

There will be those who find Leviathan a chore; and there’s no doubting that as the run-time strays past the hour mark, and the cycle begins again, that Leviathan becomes repetitive; the many extended shots become over-extended, and the initially disorientating effect falls to diminishing returns. The lack of dialogue, story, character, etc might also be a roadblock to some.

But for the most part, Leviathan is an astonishing experience. A bleak, strange and alien vision of a world and life that we rarely think about. It’s a piece of incredibly innovative film-making, and it’s apt that it’s on release around the same time as Gravity. Both place you in an alien environment, suck you into the action and aim to leave you breathless. As great and authentic as Gravity may be, there’s no getting around one simple fact that puts it to shame in the face of this strange, disquieting delight of a film: Leviathan is real.

Previous: Star Trek 3 could beam up Joe Cornish
Next: Diana US release is a car crash 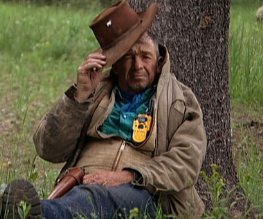