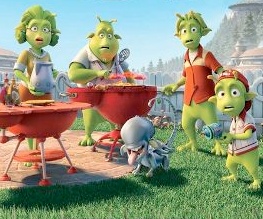 This seems to be the season for films with just one good idea. Last week The Box stunned us with it’s complete failure to follow through on an interesting premise, and sadly Plant 51 follows suit in this vaguely amusing family romp.

The central idea, that if a human lands on another planet he becomes ‘the alien’ himself is a good one. Dwayne ‘The Rock’ Johnson lends his voice as suitably beefy and arrogant astronaut Captain Charles from the Yoo Ess of Ay. He lands on Planet 51, a place that he has been assured is devoid of life, to find that life is very much in evidence. Life is wearing 1950s America style jackets, having barbecues and skipping around on little green feet. Charles has landed on a planet that has always lived in fear of ‘a human invasion’ and its only through the cunning of new alien pal Lem that Charles manages to escape alien probing and brain removal. Cue an hour and a half of 1950s B-movie references, lots of bashing through wall jokes and cute antics of Charles’ trusty robot sidekick Rover.

This film is perfect for two types of people- the under 5s and those obsessed with old culty B-movies. The story is bland, uncomplicated and predictable; hide the human, fall in love and save the day are missions lazily ticked off as the film progresses. There are lots of references to films such as E.T, 2001: A Space Odyssey and Lost In Space that will be lost on the little ones but might be amusing for those who love sci-fi.

It isn’t even that this is a bad film, as it looks beautiful and the voice talents involved really give it their all. John Cleese and Gary Oldman are great as the alien scientists bend on human dissection, Johnson shines as the lead and Jessica Biel is suitably seductive as Lem’s love interest. The problem is that the film has essentially just one joke, repeated over and over again. He’s a human, they’re aliens and it’s all been twisted around. Laugh, I say! Laugh! This laziness in the writing also comes across in the characters, it’s difficult to really care about anyone on screen. It’s quite funny in a gentle way, anyone with little little ones will be pleased to know there’s not really a smutty joke in the entire thing (though there is an amusing hint of the physical implications of probing at one point). If you’re searching for a worry-free trip to the cinema to keep the kids happy, Planet 51 will do you just fine. But if you’re looking for a kids film with heart, real meat to its bones and sophisticated storytelling, we’re afraid you’ve crashed landed on the wrong planet.