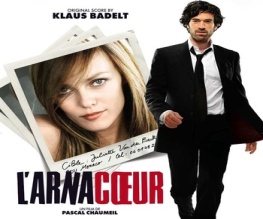 It’s so rare to find what I like to think of as a ‘Ronseal rom com’, which is incidentally very hard to say if you’re Jonathan Ross. Generally speaking, romantic comedies fail to deliver on at least half their remit – they’re either funny films with a half-arsed romantic plot arc (step forward, Love Actually), romances with a few limping jokes (thanks very much, Music and Lyrics) or trite nonsense which insults both genres (high five, Sanda Bullock, you and your entire rotten CV). So when you find a film which genuinely makes your heart ache as much as your stomach, it’s worth celebrating. Heartbreaker, Pascal Chaumeil’s directorial debut, is just such a film.

A delicate, romantic soufflé. Or possibly a madeleine. Not a crèpe, anyway.

Unforgivably, before seeing Heartbreaker I was barely acquainted with its hugely talented and impossibly beautiful stars, Romain Duris – he of the borderline-illegal smouldering gaze – and Vanessa Paradis, who is so utterly perfect that she didn’t even have to adopt a nom de scène when she became a pop star, actress, model, muse and general adorably gap-toothed wunderkind. She already had the prettiest name EVER. I knew that both actors were well respected for their various arthouse ventures, and wondered whether their heavyweight credentials as serious performers would end up weighing down the deliciously insubstantial froth which marks any good romantic comedy.

I needn’t have worried. Heartbreaker’s plot is simple, delicate and beautifully constructed, and the cast wear their characters like old clothes. Duris stars as Alex, an irresistibly charming rogue who seduces women for a living – he is paid by concerned fathers, brothers or friends to break up unsuitable relationships, but his personal code requires that he only intervene “when the woman is unhappy but doesn’t know it”. However, when a loan shark and his giant Serbian thug come calling, Alex is forced to take the one job he swore to avoid and set his sights on a perfect couple – less than a week before they tie the knot! Along with his sister Melanie (Julie Ferrier) and her husband Marc (François Damiens), his support team, he heads to Monaco to finally break a heart rather than just a relationship. He inveigles his way into the life of his target, the seemingly straight-laced Juliette (Paradis), by posing as a bodyguard, but as he begins to work his charms he realises that for the first time ever his defences are slipping as quickly as those of his target.

Everything about Heartbreaker works. It’s that simple; Chaumeil’s direction is engaging and sensitive, the plot is fast-paced and the script is genuinely hilarious. The supporting characters are sympathetically portrayed and a pleasure to watch – unfortunately, the only dud note amongst the cast is lone Englishman Andrew Lincoln, who clunks through his lines like a South West Trains branch service next to a gleaming rank of TGVs. Monaco’s grand hotels and azure sea provide a backdrop which effortlessly trumps anything a British film could offer, and the soundtrack very sensibly steers clear of French pop, leaning towards eighties feelgood hits which all manage to be relevant to the story itself. Vanessa Paradis is charming in what is essentially a major supporting role, since she and the rest of the cast are happy to orbit the star-in-the-making who carries the film upon his wiry shoulders. In Romain Duris we have an actor who has already proved himself with serious roles, and Heartbreaker showcases the ease with which he flits between comedy, romance and pathos.

I left the cinema giggling, but I also felt genuinely uplifted – Heartbreaker’s conclusion is as predictable as any other romantic comedy you care to name, but the entire project has been handled with a degree of style which elevates it above the rest of its rather hackneyed genre. Together or apart, Duris and Chaumeil are definitely men to watch, and if they’re as new to you as they were to me then Heartbreaker is the perfect place to start.

Previous: If Action Movies Were Real (A Slough Exposé)
Next: Sex and the City: DVD Review