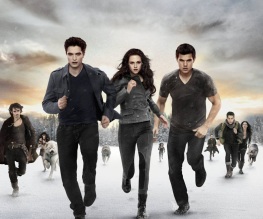 Listen. I’m not a Twilight person. These films – although written for a demographic which I undoubtedly belong to (socially awkward girl-woman) – are not my thing. Indeed, I’ve spent quite a lot of my recent life ridiculing this franchise (see here and here) to make people on the internet like me. It’s the easiest thing in the world to make fun of a Twilight film because all you have to do is watch it and repeat all the things the characters are saying and doing. But, you know, at the end of the day this is a series which – regardless of its “worth” as a piece of art – has meant something very special to a lot of people out there. Indicated, indeed, by the fact that as I watched the credits roll on the latest, and last, Twilight film in the series the other day, I heard a group of girls behind me bursting into actual tears. And while it’s very easy for me to be a cynic about this piece of nonsense, who am I, who is anyone to judge? How can I even attempt to critique a film that has had such massive popular success and inspired a generation of – OH WHAT THE HELL I’LL GIVE IT A GO.

The Twilight Saga: Breaking Dawn – Part 2 opens with some credits or other featuring shots of trees and snow and blood. And then BAM! there’s Bella (Kristen Stewart) who is a vampire now. You can tell because she has red eyes and all she can think about is eating rock-climbers and mountain lions. The good news is that apparently being a vampire means you can see miniscule things like motes of dust floating in columns of sunlight and bits of Custard Cream that you dropped in the carpet earlier. Anyway, once Bella’s rapidly adjusted to being an undead glittery rock person and has had a nice hug with hubby Edward (Robert Pattinson), she is introduced to her demon spawn Renesmee, who – since the events of the last film – has grown into a CGI devil baby. I’m being serious. Can we talk about this CGI baby? Can we have a serious, in depth discussion? 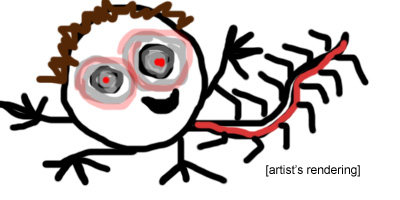 This is more or less exactly what the Twilight baby looks like. Why didn’t they get a normal baby? “We auditioned 500 baby actors and none of them had hair that looks like a pubic wig so we had to CGI it” – Stephenie Meyer, producer. Weirdly though, nobody seems too fussed. You know what the Cullens are like at a family get-together, in their navy and taupe J Crew knits, looking fondly at everything, listening to Robert Pattinson play the Twilight theme on the piano. Of course Jacob (Taylor Lautner) makes an appearance, turning up in what looks like a caramel unitard, and there’s a bizarre moment when he tells Bella he’s imprinted upon her baby daughter (that’s werewolf speak for fancying a baby). 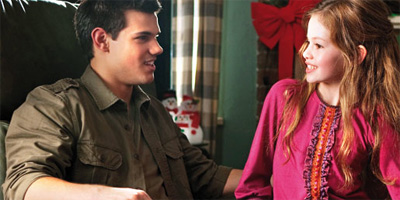 (STAY AWAY FROM THE MINOR JACOB)

At this point you’re probably thinking “so what’s the plot?” What a good question that is. Well, in exactly the same fashion as all the other Twilight – or indeed Rocky – films, the main thrust of Breaking Dawn – Part 2 is that everyone has to get ready for a big fight that will be happening in the next fortnight or six years or, as psychic Alice (Ashley Greene) advises sagely, “when the snow sticks to the ground”. FFS Alice. We need dates here. We then spend about three hours watching various members of the Cullen clan traverse the globe recruiting vampires. Irish ones (they wear hats), old ones, young ones, girl ones, sexy ones, ones that eat humans, ones that look like they make a living as Kurt Cobain impersonators, ones that have no lines NO LINES WHY ARE THEY ON THE SCREEN.

There’s an extremely morally dubious moment where Nikki Reed and BFF favourite Kellan Lutz go off to recruit a vampire called Garrett (Lee Pace), who looks like he spends his spare time touring as the lead singer of a Christian Rock band. When they encounter him he’s taking down an innocent human. “Hey Garrett, come hang out in our glass and wood forest mansion” they say, and he’s like “Sure I just have to finish my dinner” before he ACTUALLY eats the guy while Nikki Reed and and Kellan Lutz look on and laugh gently. Classic Garrett, they’re thinking. Since when is this cool? Since when are the peaceful Cullens OK with their vampire friends eating people? “Hey guys I don’t agree with your human-eating tendencies but I respect your right to eat humans” – Cullen family motto. 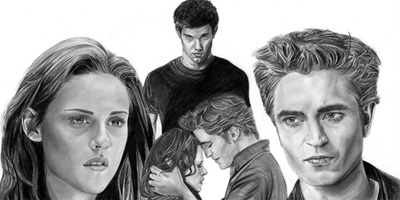 At some point they finish collecting their seventeen thousand vampire friends and then spend a lot of time hanging out in the woods and standing around inside the Cullens’ house because there just aren’t enough chairs for all these vampires. Why they’re doing this I can’t honestly be sure but I think it has something to do with Michael Sheen who essentially plays Lucius Malfoy’s less sexy brunette brother. Michael Sheen suspects that Bella and Edward’s CGI devil baby is some sort of evil thing and must be destroyed (correct, Michael Sheen, you are very correct). 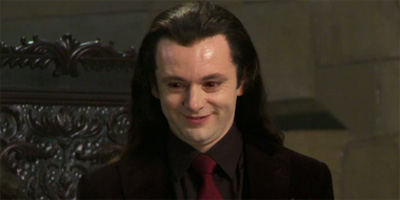 Eventually, after what feels like an eternity of watching the vampire recruits stand around looking at everyone else’s jumpers, Michael Sheen and his Italian vampire colleagues turn up in that huge field. You know that one the Cullens are always using for battles and baseball games. What happens next is actually surprising. Shit starts to go down. And it’s briefly – compared to the plotless nonsense that has preceded it – tremendously entertaining. The bad news is that it really doesn’t last long. And, I don’t want to spoil it for you (although all the people involved already did that for you), but this film contains one of the most unbelievably annoying cheats of recent cinema history. The sort of nonsense that enables Condon and Meyer to have their cake and eat it. WELL I HOPE YOU CHOKE ON YOUR CAKE YOU CYNICAL, HEARTLESS PHILISTINES. YOU’VE TAKEN THE ONE GOOD SEQUENCE IN THIS FILM AND RUINED IT, RUINED IT, RUINED IT.

Ultimately, this film follows on in the same tone as all the previous ventures, slowly building to a climactic fight which is rapidly and bloodlessly resolved before everyone returns to their forest mansions to talk about how they’re going to live forever and ever. Stewart and Pattinson, so numbed by the long years of acting in these films that they barely know how to move their faces anymore, make some effort with the script but there’s an unlikeable complacency about the whole affair. You can’t help but feel that between every take, everyone on set took a break to roll around in their money and fur coats. Just imagine that. Kristen Stewart and Robert Pattinson and the Kurt Cobain vampire and Stephenie Meyer and Bill Condon and the CGI devil baby and the best boy and the gaffer and Kristen Stewart’s stunt double and the man who delivered all the sushi and everybody else who was involved, rolling around in money and fur coats. NOW IMAGINE THEY’RE ALL DEAD. Don’t you feel better now?

Previous: Jack Reacher beats the crap out of 2 new TV spots
Next: Sandra Bullock in trailer for Paul Feig’s The Heat