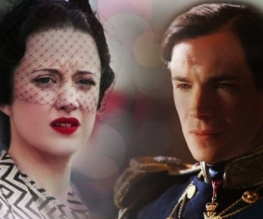 Hey, you remember The King’s Speech? Remember that whiny American who followed Guy Pearce around during the second act? Well, imagine if she had a film to herself! Sort of. Better yet, what if she were to share a film with another spoilt daydreaming American who’s crushing on her from sixty years away – think Julie and Julia, but with fewer blogs and more accusations of Nazism. And the cherry on the cake would definitely be if Madonna, who is easily as bad a director as she is an actress (and that’s saying something) could trot up to the set with her red wristband and her terrifying biceps and actually run everything. Do you think you could manage that, black Jesus from the Like A Prayer video? Ace. In 191?, Wallis Simpson Windsor Something Else (Riseborough) is having an angry bath because her husband didn’t come home for dinner. In 199?, so is Wally Winthrop (Cornish). The difference is that Wally’s husband (Richard Coyle) doesn’t come home, pick her out of the bath by her hair and kick her in the stomach so that she miscarries all over the clean floor. Wally, who’s convinced that her paediatrician doctor is cheating on her, is killing time with an old friend at Sotheby’s when she wanders into an exhibition of ephemera belonging to the Duke and Duchess of Windsor (formerly Edward VIII and Wallis Simpson). Conveniently developing an overnight obsession with her apparent namesake, Wally spends the next God knows how long mooning around the gallery day after bloody day whilst Evgeny (Oscar Isaac), a “Russian intellectual slumming it as a security guard” (no, really) spies on her via CCTV. Classy.

Returning to Wallis ‘ow my womb’ Simpson, it’s 193? and she’s finally married Homer or whoever, allowing her surname to catch up with the public consciousness. However, things are buggered once she meets the dashing and rather naughty Prince of Wales (D’Arcy), who sets his sights firmly on Wallis as she happily reciprocates. “Your royal highness, what a surprise!” blusters Mr Simpson one evening as he walks in on the Prince having a Martini in his living room. “Really? I’ve been here every night this week,” drawls HRH. Surely one doesn’t fail to notice a thing like a prince on one’s sofa? Anyway, you know the drill – Wallis goes off with Edward, he renounces the throne, Colin Firth (or, rather, some skinny creature with four or five lines in the WHOLE FILM) takes over and the happy couple flee to France to be good Nazis-in-exile while poor old Bertie keeps the country going. Except things aren’t quite that simple. Really, though, who cares? Right, first things first: see that star up there? It’s for Andrea Riseborough. All of it, she doesn’t have to share at all. Riseborough is quite superb as Wallis Simpson, as convincing as a twenty-year-old ingenue in Shanghai as she is as a septuagenarian dancing for her dying husband. Be she seductive, heartbroken or simply lonely, she is never less than watchable and usually much more. Her performance is the only one worth watching – Abbie Cornish has still not learnt to act and modify her horrible accent at the same time (although she can at least stick to one or the other now, which is more than she did in Bright Star), and James D’Arcy is one-dimensional and utterly tedious as the effete Prince. I still have literally no idea what the Russian guy was about, so the less said there the better.

In any event, there’s a special lady who I’ve been saving up all of my spleen for. How many films will Madonna have to make before someone manages to tell her that she CANNOT FUCKING DIRECT? W.E. is the cinematic equivalent of a large dessert-spoonful of horrible milky baby shit running down the leg of a consumptive infant in a Victorian workhouse, and the worst thing is that everyone appears to know it. Even Cornish has the grace to look embarrassed about the fact that she spends a clear third of the film in her underwear (who needs talent when you have tits?), and Riseborough’s misery at every amateurish camera angle or stultifyingly dull line of dialogue is thick enough to cut with one of her killer heels. It’s boring, boring, boring in a way that no film with two different timelines and a backdrop of war, adultery and cameos from Mohamed Al Fayed (OH YES HE DID) has any right to be, and then just when you think it can’t get any more boring something really shocking and horrible happens. Did Wally’s husband really just say “You couldn’t give me a baby even if I wanted one, you fucking stupid cunt”? Oh, apparently he did. About an hour and a quarter into watching W.E., I took the plastic wrapping from the top of my emergency shit film four-pack of cider and tried to wrap it round my face until I died. It works for dolphins, doesn’t it? An asinine, infantile waste of time, money and at least one talented actress (maybe a maid was good or something and I didn’t notice), W.E. must – simply must – mark the end of Madonna’s career in the cinema. Oh, and just to recap: it still got more Oscar nominations than Shame. Spare me.