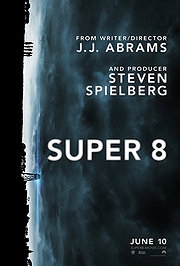 There are many limitations to being a kid with a dream, especially when its 1979, and you’re in a Steven Spielberg -sorry, JJ Abrams – movie. A passably grubby gang of youths are determined to create the greatest zombie film the world has ever known, but needs must and to save on production values the children end up filming a vital scene at an abandoned railway station. So far, so thrifty. But things take a turn for the rather more massively alien when they witness a devastating, impossibly thrilling train crash that leaves all our mini-visionaries wordless (and places JJ Abrams at the head of the league table for Blowing Stuff Up.) Left with a town in confusion, a series of increasingly strange goings on and just a tantalising glimpse of the mysterious creature responsible on their Super 8 camera, the kids find themselves caught up in a hide-and-seek mystery – and we all know it aint the Army who are going to solve it.

Kids from dysfunctional families overthrowing/healing their supposedly superior, longer-legged counterparts? A motivationally-ambiguous monster turning a sleepy town on its head? Characters who seem initially defined by their physically characteristics but pretty soon turn out to be SO MUCH MORE? Yep, this is a Spielberg film, plain and simple – but that’s not necessarily a criticism. There’s no point whinging about JJ Abrams’ arguable failure to top or even equal his hero, he’s simply continuing the Spielbergian tradition of movies that say kids can sort things out, that the military tend to get the wrong end of the stick, and that monster aliens just want to go home. And it’s the 70’s, so adults are allowed to smoke EVERYWHERE. Happy days. So, what of the monster itself? The one that received all the pre-release interest? Intriguingly, the subtle but prolongued hype led us all to believe that Super 8 was a purist monster movie, in the vein of Cloverfield. We hypothesised over the look and mechanics of the monster for months. Suffice to say, the Super 8 monster does not look like this.

JJ Abrams set the tone for a million ‘don’t show the monster’ movies with Cloverfield, and he uses the same trick to great effect here – speedy whooshes leaving a trail of destruction in their wake, municipal bins being flung high into the air. It’s exciting, and happily it’s not done to death. Rather satisfyingly, JJ Abrams never forgets that he’s making a movie for kids, and as stylistically exciting as it is to play “is it/isn’t it” with a grown-up audience, there’s no denying the childish satisfaction of a proper visual pay-off. Occasionally you just want to grab a monster by the ears and stare into its big whuffling face – and Mr Abrams, thankfully, provides. That’s why I enjoyed the big reveal in Super 8 so much. Yeah, that’s right, you get to stare at a monster huffing and breathing all over you for a really big long time. GOOD. Monster tricks can get stale. Sometimes, you just need a monster. At its heart, though, Super 8 isn’t a monster movie. It’s a ‘kids have a great time being kids’ movie, that will make adults want to be kids again, and kids feel like their bum deal could be improved very soon with an adventure just round the corner. Yes, it’s more of a nostalgic celebration of family film-making past than a trailblazing new style, but if an homage to Spielberg was what he wanted to create, than Abrams has done himself proud. If not, well, at least he’s got a great career in Exploding Trains ahead of him.

Previous: David Yates and Steve Kloves take a Stand
Next: The Salt of Life