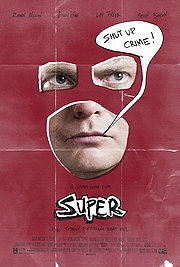 When I first saw the trailer for Super I must admit that I yawned. It has been made to look like this year’s Kick-Ass, a story about a normal guy who decides to become a superhero, armed not with any super-powers but instead with a wrench, a threadbare red super-suit and ‘The Crimson Bolt’ as his moniker. It totally smacked of a studio thinking “Kick-Ass made money, so might this”. However, now that I have seen it, I can completely understand why it was marketed in such a way; if the trailer had revealed what the film’s real message was, then nobody would have gone and seen it at all.

Frank D’Arbo (Wilson) is a loser. He tells us at the beginning of the film that he has had two perfect moments in his life: marrying Sarah (Tyler), and helping a policeman to apprehend a criminal. The rest of his life has been a patchwork of bullying and social ineptitude, and when Sarah leaves him for local strip club owner and drug peddler Jacques (Bacon), he falls apart. However, Frank is inspired to stand up for himself and fight to win Sarah back upon watching a superhero Jesus on Christian TV and then later having God come to him in a dream and touch him. That’s right. Frank is literally made to do the Lord’s work. In this case, the Lord’s work is beating the shit out of drug dealers, child molesters and people who cut in line at the cinema with a wrench, all displayed in intensely graphic ways. Maybe the film’s only plus point is that Gunn eschewed CGI for much of the gore (and there is a lot of gore), instead making clever use of prosthetics, more like Evil Dead or Bad Taste. I’m scraping the barrel though, I really am. This film commits all the cardinal sins of American indie-wood film-making. The camera work is shaky, presumably in an attempt to create some semblance of realism, though instead it just looks amateurish (and is completely antithetical to the lighting in the film, which makes everything glow with a hazy beauty). Songs are relied upon far too heavily to create emotional resonance, whether that be tension, humour or poignancy, which occasionally makes the film seem like a string of music videos stitched together. The script isn’t funny when it tries to be funny, isn’t moving when it tries to be moving and is occasionally deliberately and needlessly offensive, as when comic book nerd Libby (Page) begins to talk about how “mongoloids have weird eyes” (And before you say anything, this has nothing to do with political correctness having gone mad, it’s a cheap, nasty attempt at humour). Similarly, the two black characters are complete stereotypes of the worst kind: Hamilton (Andre Royo), Frank’s colleague and the cheap diner where he works, is a wise-crackin’, misogynistic homophobe who says Frank should forget about Sarah because she’s “sucked more dick than his faggot brother”. Perhaps worse though is the drug baron at the end of the film who may as well have stepped straight out of Birth Of A Nation.

Some other critics have argued that this film illustrates how Christianity can delude people into committing terrible acts. However, what the film preaches is that these acts aren’t terrible, as they have a religious justification, and are essentially a means to an end (the end I obviously won’t spoil, but trust me, it is the most mawkish, cloying attempt at sentimentality I have ever seen) – it’s as if the film was made by the Phelps family. Frank is never punished for anything he does and the film completely justifies all of his actions, saying that two wrongs most definitely do make a right. A deeply questionable, even dangerous message, and one that jars with the broad, unsubtle comedy the film goes for.