The British Guide to Showing Off 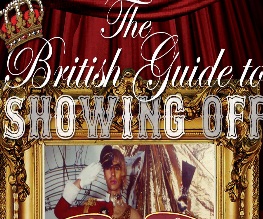 Now I don’t know about you, but I’ve never taken drag queens particularly seriously. I hear drag and I think Panto, Pete Burns and penises. I generally don’t think about high art. Or at least, I didn’t. What The British Guide to Showing Off achieves is a look at the cross-dressing community that transcends your basic stereotype of men dressing up like ladies and telling rude jokes. Rather than capture the tawdry, The British Guide to Showing Off strives to portray the thriving art scene that surrounds The Alternative Miss World pageant. Or, as creator and artiste Andrew Logan deftly surmises, “It’s not about gender, it’s about transformation. Why transform from a man to a woman when you can be anything you want?”

What is made resoundingly clear in the opening scenes of The British Guide to Showing Off is that The Alternative Miss World is primarily concerned with joy, self-celebration and the art of performance. Yes, this may sound like a cheesy summation of any Pride Parade’s manifesto, but the sheer opulence of Logan’s execution makes him an immensely involving hero to follow throughout the film. Directed by Jes Benstock, the film’s execution seeks to be as outlandish as its stars. Furnished with surrealist animation that almost echoes a Python-era Terry Gilliam, the documentary intersects a biography of Logan with the history of the 40-year old pageant, simultaneously following Logan as he orchestrates 2009’s event. We see 1998’s winner, a 78 year old Russian woman with a penis on her head. We see wigs, props and bodypaint slip past the ridiculous and into the magnificent. We believe Logan when he says it’s an art event rather than a drag show. Everything about Logan and his pageant is shrouded in glittering genius, as we see him meticulously planning and attempting to fund his most important artwork, the living sculpture that is the AMW. Beginning in 1972, the pageant has a sporadic and scattered history, often going without an event for years at a time. The flagship contest in 1972 was, according to Logan “another excuse for a party” in “a converted jigsaw factory in Hackney”. The second event in 1973 was so full that David Bowie was turned away at the door. Perhaps most ludicrous is the 1986 ‘Earth’ show, which had initially been planned to take place in the Chislehurst caves. This was cancelled when local newspapers decided that the participants would inevitably have sex in the caves, resulting in an AIDS epidemic throughout the town. Because that’s how AIDS travels. UNDERGROUND.

Perhaps the most affecting element of the film is the interviews with the contestants themselves: largely ordinary people who use the Alternative Miss World Pageant as their singular method of expression. Their time to wave their freak flag, as it were. We see a divorced country woman laying out her costume on her bed, feverishly preparing for 2009’s event. “Everytime I ever wanted to do something outlandish, there was always someone telling me I couldn’t. Nobody ever said that to Andrew Logan.” She suddenly picks up a massive hunting rifle. “I bought this when my husband left me.”

Despite the problems Logan’s team repeatedly run into in planning 2009’s Alternative Miss World, Logan himself remains a paragon of zen-like calm, seemingly transcending the notion of stress. Despite his flamboyant appearance, his ambitions and protectiveness over the Alternative Miss World are firm. When one of his younger team members suggests that 2009’s pageant introduce an automated score board, Logan emerges from his ocean of calm to put his brightly coloured foot down. “No,” he says “it’s not about keeping score. Everyone who is this contest is in it until the very end, and that is final.” Andrew Logan is in equal parts the Wizard of Oz and Willy Wonka of the alternative scene and it’s not difficult to be seduced by the joyful glamour and exuberance of The British Guide to Showing Off. While the production is packed with scenes so over-the-top they’d make Baz Luhrmann blush, the film tends to drag in places. Focusing more on the minor deity that is Logan rather then the contestants themselves. However, the film is easily the most fun you’ll ever have at a documentary.

Previous: Hayley Atwell boards the Nautilus for The Return Of Captain Nemo
Next: The Human Centipede 2: Full Sequence