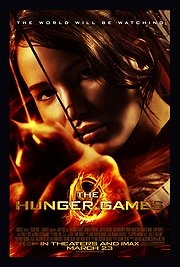 “What would happen if we all just stopped watching it?” asks our heroine’s best mate Gale as they take a brief moment of respite from hunting the day’s food. The spectacle in question is the annual Hunger Games; a morbid tradition in which a teenage boy and girl from each of the 12 Districts of Panem (the new North America) are chosen to compete against one another in a televised fight to the death. The “reaping” – the choosing of the not-so-lucky boy and girl – is to take place later that day, and neither one of them can quite shake their uneasiness. “We wouldn’t” replies Katniss (Jennifer Lawrence), fully aware of the Games’ popularity with those who live the high life in The Capitol. “Yeah, but.. what if we did?” It’s the first in a number of ruminations about power that punctuate the bloody action of The Hunger Games, alerting the viewer to the fact that this might be more than just another calamities-and-clearasil teenage romp through an unlikely love story. About time. When Katniss’ younger sister Primrose is chosen to represent their district against all the odds, it’s with a strangled scream that Katniss offers to take her place, no matter what the cost. So numb with shock that she barely registers the boy – Peeta (Josh Hutcherson) – chosen to stand alongside her, Katniss is whisked off to the Capitol as a champion, stunned into silence by the opulence of her new surroundings. The celebrations at the Capitol of the chosen ‘Tributes’ from each district are hysterical, sickening in their enthusiasm and hypnotising in their garishness, and it soon becomes clear that the quiet, solid grief that registers on Katniss’ face will do her no favours. “They want a show!” exclaims her trainer (Woody Harrelson), “you have to give them a show!” With four days to make an impression on potential sponsors, to win over a screaming nation and to make sure she looks as gosh darn pretty as she possibly can for the opening ceremony, there’s very little time for Katniss to concentrate on the black fact of the matter: if she wants to return home, she’ll have to outlive 23 opponents. And not only outlive, but kill. So sure, it’s Battle Royale for the Twilight generation. But Jesus if ever a generation needed it. What’s interesting about The Hunger Games is that it far outstrips its entertaining source material in terms of sophistication, sacrificing the (fairly uninspiring) insights into Katniss’ adolescent love-worries in order to open up the narrative to other perspectives – creating harrowing juxtapositions out of reach for the novel itself. For every grisly kill, for every tear wept and every grim injury sustained there are jubilant reactions from the baying crowd, enthusiastic commentary from unbearable presenters, brisk, unemotional direction from the control room and the incessant reminder of what it all means for the families waiting at home. Where Collins’ novel was tight, bare and gritty, Ross’s film is almost over-flowing with colour and action; lurching sickeningly from character to character to create a dizzyingly familiar world obsessed with the most glamorous take on the most horrifying atrocities. So is it a love story? Not really. If anything, the strange relationship struck up between our two central players Peeta and Katniss comes off more as a stance against our obsession with on-screen romance – formed by a need to win over the crowd, to provide their glazed-eyed audience with something to believe in if they want people to root for them. Lawrence’s pitch-perfect performance ensures that Katniss keeps her focus on survival; stoically and bemusedly tolerating the affections of the seemingly genuinely besotted Peeta in order to keep them both alive. It’s pretty fucking refreshing, is my point, a sneering attack on a nation that prizes cynical, manufactured love stories over the far more interesting truth. The supporting cast too are uniformly strong – with a deeply sparkly Stanley Tucci and Elizabeth Banks particular highlights as the TV presenter and District 12 representative, blissfully unaware of the blank horrors of their role. Taking all the right bits of the source material and carefully adding a hell of a lot more, The Hunger Games is must-watch stuff for anyone sure young people today deserve access to a team far more interesting than that of Edward or Jacob. Slick, unforgiving, brutal and timely – I’d make a joke about the odds being ever in director Gary Ross’s favour, but it’s safe to say that luck has nothing to do with it.