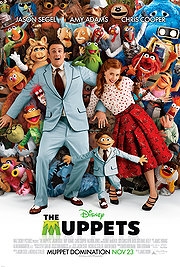 Gosh, we’re all about nostalgia in 2012, aren’t we? With The Artist‘s relentless success showing the world that cinematic past may well direct box-office future, it seems thoroughly appropriate that the Muppets’ first outing in 12 years is singing off the same silent sheet. As it were. A film that champions faith in innocence, in irreverence, in old-fashioned values and in genuinely non-threatening dance-moves, it’s certainly an antidote to the rough-skinned, cynical society we’re all tired of weeping about. Does it stand alongside Christmas Carol and Treasure Island as shining examples of what the family genre can achieve? Possibly not. But if a film is going to centre on an idea rather than a story, we could do a lot worse than Lovely Things Are Still Important. That they are, Muppet friends. That they are. So, it turns out the world is a rubbish place these days. It’s been years since the cancellation of The Muppet Show, TV is stuffed to the brim with shows like “Punch Teacher” and no-one has the time or the inclination to find out what happened to the hairy puppets the world used to love. The old team has been disbanded; Fozzie is working in Reno in a gloriously hideous Muppet Tribute band called The Moopets, Gonzo’s the head of a toilet emporium, Animal’s given up the drums for good and no-one has heard hide nor scale of Kermit The Frog since the Muppet Studios were shut down.

But there’s a young chap named Walter who refuses to give up hope. Ever since he was born a puppet (we’ve all been there), he’s felt a deep, soulful connection to the colourful team, replaying old episodes of The Muppet Show with his brother Gary (Jason Segel)and staring hungrily at the pure joy locked within every frame. When Gary and his girlfriend (Amy Adams) decide to take a trip to Los Angeles, Walter tags along determined to see the famous Muppet Studios for himself. But when they arrive it’s clear that there’s no trace of the old magic left – the buildings are decaying, abandoned and manned only by a wheeling-dealing Alan Arkin, damn him. Sneaking into his hero Kermit’s old office, Walter overhears the plan of dastardly oil tycoon Tex Richman (Chris Cooper) – he’s going to destroy the place completely (turns out there’s oil underneath these here grounds) and Walter knows that the only thing left to do is to try and get the old gang back together. One more show, that’s what it will take. One more great show and they might just raise the money to save their home. And Animal’s drums – just in case he decides he might want to play again… Oh gosh it’s good to see them again. From the achingly joyful opening number “Life’s A Happy Song”, it’s clear that we are in a cynicism-free zone; where gleeful self-reference, slapstick comedy and and felt-heavy protagonists rule the Cee-Lo-Green-singing-chicken roost. Keeping the story simple and the arc clutter-free, Segel’s script is instead free to bounce from joke to joke, playfully riffing on classic movie conventions (“in order to save time, might I suggest we collect everyone else by montage?”), celebrating the characters we love so dearly and hammering home the message that made the Muppets family favourites in the first place: believe in yourself, and believe in those you love. Seeing Gonzo rip off his corporate attire to reveal his human cannonball costume, watching Miss Piggy do battle with a back-streets imposter, seeing Dr Honeydew and Beaker do literally anything at all – it’s tempting to attribute the joy of these moments to nostalgia alone, but it would be an injustice to do so. The thing that made the Muppets great to begin with is still out in full, triumphant force: the ability to merge innocent, open-hearted joy with irreverent, brilliant self-awareness. In an increasingly hardened, celebrity-focussed movie world, it’s often the big names and sexy content that draw the youth of today to the cinema – and kudos need to be given to the Henson team for keeping the focus on the furry heroes themselves. That’s not to say there aren’t stellar cameos – Neil Patrick Harris, Whoopie Goldberg, Selena Gomez, Jack Black – all come and do their thing, but they are throwaway extras in Kermit and crew’s show; a bit of added fun in a story that doesn’t need them. I have to say though, there were a couple of things that disappointed me about The Muppets. The music, a staple of any classic Henson flick, seemed at times to be lack lustre; peaking in the opening number and then never really ever hitting the same heights. The simplistic story means there aren’t a lot of opportunities for interesting character developments – Amy Adams, for instance, barely has anything to do save look a bit put out – and with so many treasured Muppet pals to focus on, we never quite get a satisfying grip on any of them. Frank Oz decided not to return to this film because he believed that it was a script that was led by jokes rather than story, and he’s completely right. Segel’s script makes for a face-splittingly good time, but with nothing ever really at stake it doesn’t quite have the firm grounding of previous Muppet exploits. The thing is, despite the central conceit of this film, there was never really any doubt that the Muppets are here to stay. Now that we’ve stopped worrying about it, let’s give them a story worth telling.