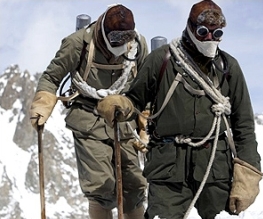 In 1999, American mountaineer Conrad Anker discovered the body of British explorer, George Mallory, frozen fast to the side of Mount Everest. Mallory, who disappeared in 1924, was last seen just 800 metres from the mountain’s peak, accompanied by his young climbing partner, Sandy Irvine. The remarkable find resparked a long standing mystery; did Mallory and Irvine perish whilst they were going up, or when they were coming down? Success in reaching the summit would place them there some 30 years before the recognised conquerers, Tenzing Norgay and Edmund Hillary. But could such a feat be possible? This is the question that The Wildest Dream sets out to answer.

When Mallory’s body was found, his possessions were well preserved. However, the photo of his beloved wife, Ruth – which he had promised to leave at the summit – was conspicously absent. With this teasing piece of information playing on his mind, Anker is determined to find out if Mallory really could have made it. Equipping himself with replicas of the period clothing found on Mallory’s body, and also taking with him a young English climbing partner in the form of Leo Houlding (the Irvine to his Mallory), he ventures to Everest, ready to retrace the famous ascent.

Oddly, though, their experiment is riddled with inconsistency. Upon reaching the plateau that leads to Everest’s peak, Anker explains to his young accomplice how this part of the journey alone would have been a “three week trek” for Mallory. He and Houlding, however, arrive by jeep. Similarly, though they do insist on climbing the notoriously difficult ‘Second Step’ without the assistance of the ladder that has been in place there since 1975, the duo’s attempts to use period equipment are sporadic at best. Whether this is owing to health and safety regulations or simply a matter of discomfort is unclear, but it does mean that the only real conclusion drawn is that doing the climb in old fashioned clothing and hobnail boots probably wouldn’t have been very much fun. Not quite the revelation we were hoping for.

Yet to focus solely on this reconstructed ascent is to ignore the film’s more intriguing aspects. The tale of Mallory’s life and death is both fascinating and suitably well told. With Liam Neeson capably filling the role of central narrator, Mallory’s letters are beautifully read by Ralph Fiennes, with the climber emerging as a beautifully complex character. A born explorer, he was greatly inspired by Robert Scott who died in 1912 on his return journey from the South Pole. Four years later, Mallory fought at the Battle of the Somme, learning the fragility of human life and vowing to live his to the fullest. With the extremes of North and South both already conquered, Everest soon became a ‘Third Pole’ to Mallory. It was to prove both a beautiful dream and a frightful adversary.

Torn between the wife he so dearly loved and mountain that could either make him or destroy him, Mallory and Ruth kept in touch through a series of incredibly tender letters (Ruth’s here being read by the late Natasha Richardson). The exchanges reveal a man ruled not just by obsession, but also great emotion. Confiding with his wife after a disastrous expedition in which seven men died, Mallory solemnly summarises; “It has happened forever and nothing can make it good.”

Why then, did Mallory continue to pursue the clearly dangerous peak? Mallory’s famous answer was simply “because it’s there” and the use of finely restored archive footage here ensures that Everest is depicted as a suitably mesmerising presence; one that men and women would risk snow blindness, frostbitten larynxes and even death to defeat. When combining this passion with a fine use of voice talent, The Wildest Dream is both captivating and remarkable, but its attempts to uncover the truth behind Mallory’s fatal accident are never quite as convincing. Just like the whereabouts of Sandy Irvine’s still undiscovered body, that remains a secret only the mountain can know.

Previous: Back to the Future – popping the time bubble
Next: Emma Thompson joins MiB 3