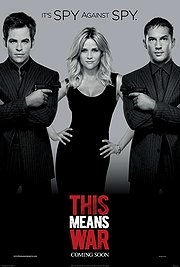 The director of both Charlie’s Angels films, the worst Terminator film ever and, like, some music videos has inexplicably been allowed to run amok with some of Hollywood’s most bankable stars and a $65m budget. And a script by the chap who wrote Just Go With It, the five-time Razzie-nominated carcrash starring Adam Sandler and his massive t-shirts. This is a bit like when I had to have long division explained to me for the eight hundredth time aged twenty – you can sit down and talk me through how This Means War ended up being vaguely watchable just as many times as you want, but I already know it’s never going to click. Okay, here’s how it goes down. FDR (Pine) and Tuck (Hardy) are kick-ass CIA spies, yeah? Never mind what an Englishman is doing in the CIA, or why FDR goes around calling himself FDR when that’s clearly about as much of a name as McG is. The sort of thing they do is infiltrate a penthouse party in Hong Kong, shoot everyone and then let the bad guy BASE jump to safety with a dead brother and a swiftly developing revenge complex. Don’t worry, you won’t basically see him again until the last ten minutes of the fim. ANYWAY, Tuck isn’t just a gun-toting yobbo (FDR is), and he’s in one of those awkward ‘my ex-wife’s dating but I’m not, and also my son is rubbish at MMR’ scenarios with which we’re all familiar, so he joins a dating site. All clear so far?

Elsewhere in LA (assuming that’s where we are, it usually is), consumer product testing guru Lauren (Witherspoon) is single and distinctly miserable about her ex getting engaged. Her friend Chelsea Handler (the character had a name, but Chelsea Handler was just playing Chelsea Handler so whatevs) signs her up to a dating site (!!!!!!!!!!!!!) and Lauren is promptly paired up with Tuck. FDR insists on monitoring their date in case Tuck needs an escape route, but after Tuck and Lauren part he ends up meeting her in a shop. Lauren spurns FDR’s advances, but he’s creepily insistent and eventually they end up going on a date. And then another date. And then Lauren goes on another date with Tuck. And then one with FDR. Naughty Lauren, that’s not how you get a nice husband and a place in the sewing circle! The two friends realise they’re dating the same girl and decide to battle it out without spying on or interfering with each other’s efforts, and without succumbing to temptation and bonking Lauren. They then go ahead and ignore all those rules for the rest of the film, obviously. Cue montages! God, it sounds even worse written down; and, of course, a lot of it is just ridiculous. McG’s childlike overenthusiasm for fight scenes is as suffocating as it ever was, with Pine and Hardy seemingly contracted to smash at least every third chair/table/window they pass with their muscular backs. Til Schweiger, the legendary German film star who plays that villain from the beginning, has a radically pointless role which encompasses the first five and last ten minutes of the film, with perhaps two thirty-second scenes in between – it’s as if he skived off to go fishing about two days into the shoot and only popped back to pick up some sandwiches from the catering van. The plot’s outrageously predictable, Lots of people have bad hair and there’s no way an Englishman would ever be called ‘Tuck’.

What on earth was there to like, then? Answer: more or less everything that McG couldn’t fuck up. Chris Pine plays that cocky twat that’s basically his only role (cf Star Trek, Unstoppable &c) with the twattish cockiness he’s honed so carefully, and Tom Hardy is unexpectedly appealing in a rare comic turn; it’d be good to see him doing fewer growly films and more of this sort of thing. Reese Witherspoon is sparky and fun, of course, but she doesn’t really ooze the sort of animal magnetism that the film’s premise demands – that’s alright, though, because the film’s real romance is between Pine and Hardy. Touchy-feely, obsessed with reminding each other of their mutual love and willingness to step in front of bullets and so on, FDR and Tuck never needed a girl to distract them from slapping each other’s arses. The most baffling thing about This Means War, however, isn’t any of the above. It’s that it’s really funny. Every dud line is more than made up for by a handful of genuine laugh-out-loud moments, which is just extraordinary once you remind yourself that this script was born of the same pen that produced the ‘memorable’ scene in which Jennifer Aniston and Nicole Kidman dance for the amusement of Smug Adam Sandler. This film is living proof that nobody’s Hollywood career is ever dead and buried – we’ll look forward to McG pulling his thumb out of his arse and getting on with some cinematic redemption of his own.