A Lonely Place To Die 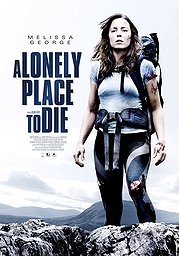 A Lonely Place to Die, the new film from Julian Gilbey, has already screened at North Carolina’s ActionFest this summer, and it’s shortly due to close FrightFest here in London. You might be forgiven for assuming that it’s an action/horror film, mightn’t you? Happily, it’s nothing of the sort. Channelling the visceral fury of gritty flicks like Harry Brown and using its uncompromisingly stark setting to full effect, this is an early Christmas present for fans of the classic British thriller.

Experienced mountaineer Alison (George) is gearing up for a refreshing weekend of clambering up dangerous rocks with her her climbing partner Rob (Alec Newman) and slightly reluctant mate Ed (Speleers). She doesn’t even let herself be put off when Ed’s arsing around nearly knocks them all off a sheer cliff face, soldiering on to meet up with their friends Alex and Jenny (Garry Sweeney and Kate Magowan). Alex and Ed don’t exactly hit it off, and Jenny’s too busy worrying about being away from her new baby to notice what’s going on, but things loosen up after a bottle of gin and the fivesome charge off up a hill the next morning in reasonable spirits.

However, there’s nothing calculated to kick a bloody great hole in your minibreak like hearing some odd noises in a wood and subsequently finding a live Serbian girl buried in a plywood box. Seriously. Take a second to try and think of something more likely to ruin the ambience of your lovely day of hiking – I’ll stick a photo in whilst I wait. …exactly. Anna (Holly Boyd) is cold, dirty, starving hungry and unable to speak English, but she latches on to the distinctly broody Jenny and the slower members of the party begin to head back towards civilisation whilst Rob and Alison head down a scary-looking cliff. Top tips for climbing down scary cliffs: don’t do it if you haven’t brought any scary cliff equipment, and DEFINITELY don’t do it if you think someone might be trying to kill you. Turns out it’s quite easy to kill people when they’re dangling around on crappy little ropes, which suits kidnappers, child murderers and general gits Mr Kidd (Harris) and Mr Mcrae (Stephen McCole) rather well; if Alison and co get Anna back to civilisation they stand to lose millions of dollars of ransom money, and that really won’t do…

At face value A Lonely Place To Die sounds like another relatively tired cat-and-mouse thriller, with gun-toting bad guys chasing the well-meaning but essentially useless protagonists around and picking them off one by one. This well-worn model is obviously where writer-director Julian Gilbey started working from, but by dint of solid performances, a tight script and a truly unpredictable series of plot twists he manages to elevate it above standard thriller fare. Melissa George is on fine form as the resourceful Alison, channelling more than a little of Meryl Streep’s memorable performance in The River Wild (the influence of which can also been seen in the epic cinematography), and Sean Harris’ menacing baddie is a particular delight. It’s not all good, of course. Gilbey is pitifully reliant on the use of huge, jarring dollops of TENSION MUSIC – a pity, since the tone is set well enough for them to be largely unnecessary – and the complicated plot drags Alison and co into some distinctly contrived scenes which detract from the film’s otherwise compelling realism. Ed Speleers was also deeply dull as the soi-disant male lead; I’m sure I can’t have been the only viewer crossing my fingers every time a gun was waved in his direction. However, these are hardly deal-breakers and certainly don’t stop A Lonely Place To Die being jolly watchable, capable of raising the pulse without demanding that the brain be disengaged. I really can’t wait to see what Julian Gilbey does next.