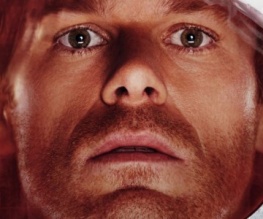 Everyone’s favourite serial killer is back! After a, quite frankly, astounding fourth season of the hit US show (with John Lithgow proving he can play utterly, utterly terrifying) the pressure was on for an equally nail-biting run, and series five doesn’t disappoint. The tension in this series is a little more brooding and pervasive than the show’s previous build-up-and-SHOCK dynamic, but it serves to keep the tone consistent. There’s very little light relief, which ties the mood of the episodes to that of our protagonist.

The plot, as always, is split between the public life of Dexter Morgan (Hall) and his private quest for murderous justice. Initially the story deals with the aftermath of the previous series’ finale, the fallout of which affects Dexter both personally and professionally – in both his careers as forensic analyst and freelance serial killer. A new dynamic for this season is Dexter’s development of emotions (something which, as a sociopath, he hasn’t previously encountered) and his methods of dealing with them; most notably, he has to treat his role as a father with more caution than before. Workplace tensions bristle, with Detective Quinn (Harrington), the new boyfriend of Dexter’s sister Debra (Carpenter), developing suspicions and hiring a crooked ex-cop to investigate Dexter himself.

As for his more violent activities, we follow Dexter as he unravels a dark mystery surrounding a creepily charismatic motivational speaker (Trainspotting’s Jonny Lee Miller) with the help of the celebrity guest character of the series, Lumen (Julia Chiles). A victim of a violent crime, Lumen acts as both Dexter’s protégé and as a necessary distraction for his grief. Together Dexter and Lumen attempt to untangle a sordid history of criminal behaviour amongst the most ordinary seeming people, suggesting that our ‘hero’ may not be the only one who can successfully mask dark desires. The cast, as always, excels – whilst Michael C. Hall is undoubtedly the core of the programme, he rarely has to carry the peripheral characters. All of the secondary characters seem to have come into their own by this series, allowing for the show to explore areas of life that Dexter cannot truly appreciate. Particularly note-worthy is the troubled relationship between DS Angel Batista (David Zayas) and Lieutenant LaGuerta (Lauren Vélez); whilst it’s something of a side plot, the struggles they face serve to give the season an extra dimension of tenderness as well as fleshing out characters that run the risk of being sidelined.

Sharp, darkly comic and occasionally poignant, season five maintains the standard of writing and performance fans and critics have come to expect from the series (with perhaps the exception of season two, but the less said the better). A must see for fans of the show, but accessible enough for new comers, this is classic Dexter.