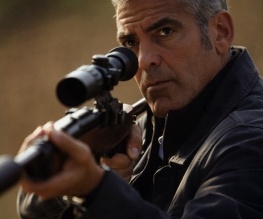 Jack (Clooney) is man who is, by his own admission, “pretty good with machines”. And though we spend two hours with him, there’s very little else we learn about this mysterious engineer – or, should we say, there’s very little else he’s willing to reveal. Behind closed doors, Jack builds guns for people who need them, to perform executions that require high levels of accuracy and low levels of publicity. Has he done the hits himself in the past? It would appear so, though Jack never lets us – or anyone else – in enough to really say. The point is, he’s a wanted man, he’s not as young as he used to be, and after one unexpected ambush too many, he’s realised its time to quit the game. One more job, and then he’s out.

Hiding in beautiful Roman surroundings for his final construction job, and after a lifetime of listening for unfriendly footsteps around every corner, Jack finally tries to unwind. But relaxing muscles that have spent years readying themselves for action proves more difficult than he’d like. Every engine backfire, every stranger in sunglasses, every unfamiliar alleyway becomes a potentially fatal enemy to Jack’s fraying psyche, and it isn’t long before neither he nor the audience can tell friend from foe. Is anyone hunting him? Is everyone? Director Anton Corbijn plays with our heads wonderfully as we try to extract the truth from Jack’s paranoia, whilst Herbert Grönemeyertaut’s score manipulates every peripheral threat, leaving us as jumpy as the protagonist himself. Can Jack trust his final client? Is the girl he meets, a beautiful prostitute by the name of Clara, another pawn in the game to get him killed? At least, he thinks, once this final weapon has been made, he’ll finally be free. Won’t he? Clooney fits his part wonderfully; his natural charisma perfectly tempered by a role that doesn’t allow him to grin his way cheekily through every scene. Though – purposely frustratingly, I assume – we never get to know anything about the man himself, Clooney ensures that we are still hypnotised by every word Jack says. He is a man tortured by past demons, by fear for his future and the bitter loneliness that comes with a life without trust, and instead Clooney’s innate sparkle is directed inwards, creating a character whose inner panic burns slowly and feverishly beneath a closed visage. Finally, it seems, our George has grown up. That isn’t to say this film is perfect; the story is unfortunately rather thin, almost to the point of lazy; relying entirely on Clooney’s – admittedly excellent – performance for our continuing attention. The cinematography too, though beautiful, is rather self-indulgent – dragging out minute after minute of inaction with languid shots of Rome as if to say “look! Look how beautiful our film is!” Though generally the minimalistic script is a refreshing change from the usual garbled action-speak, the twists, such as they are, feel a little perfunctory, leading to a conclusion that considering the taut build-up feels slightly undercooked. However, faults aside The American remains a stylish, classy and enjoyable thriller, just as long as you don’t mind looking at silent closeups of George Clooney’s face for two hours. Happily, we don’t.