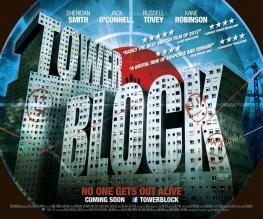 When somebody mentions a film about terrorists attacking a tower-block, most people’s minds probably skip over the uncomfortable realities of United 93 and head straight for Die Hard‘s Nakatomi Plaza. The seminal action film has influenced countless imitators – both good and bad – in the years since it revolutionised a genre, but Tower Block is more heavily indebted to it than most, featuring countless nods and homages. Not that this is a Die Hard clone – far from it, in fact. Tower Block is more like Die Hard inverted; The anti-Raid.

The plot begins with a brutal murder in the corridors of a run-down tower block, on a run-down council estate. Hearing the incident occurring outside her front-door, Sheridan Smith‘s ‘have-a-go-hero’ Becky tries to intervene, only to end up taking a savage beating of her own. Fast forward three months, and the tower block is due to be demolished, with most of the residents having already been re-housed. The remainder who are still waiting, languish in a dreary hell-hole ruled over by local thug Kurtis, who charges them “protection money”. Kurtis becomes the least of their problems, however, when the residents find themselves trapped in the tower with a mysterious and meticulous sniper picking them off one-by-one as they try to leave, or are careless enough to pass by a window.

It’s an intriguing premise, and one that directors James Nunn and Ronnie Thompson wring for all its potential (Nunn was assistant director on the excellent Cockneys vs Zombies, which Tower Block writer James Moran also helped script). The initial sniper assault is genuinely frightening. We’ve become so blasé about guns in cinema, that films can feature a hail of bullets and huge fire-fights, and we’ll just shrug and wonder when someone’s going to pop an RPG or do some real damage. But Tower Block’s sniper gimmick is extremely effective; the shock of the initial bullet is so unexpected that you share the horrified confusion of the characters, while the sound of each impact is devastating. The film doesn’t shy from depicting the damage a projectile like this can do. Put simply; Tower Block will remind you why guns are scary. 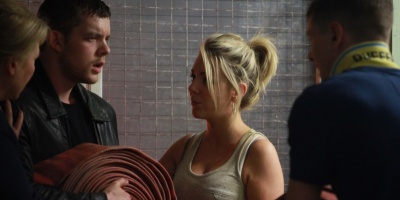 O’Connell – who has somewhat cornered the market in playing reprehensible chavs – is excellent, providing exactly the right levels of affected swagger and bluster throughout. The master-stroke of James Moran’s script is that even when the bullets start flying, and Kurtis comes around to the idea of working with everyone else to effect an escape, he does so without ever changing his character. He might do the right thing, but he’ll still be a dick about it, and justify it in all the wrong ways. You won’t ever warm to him, even when he is trying to save the day, but that’s exactly the point. There are hints as to what made him the tool that he is, but the script never has him turn full-circle, or break-down and cry about it; he’s just the way he is, throughout, and that’s kind of refreshing.

Nunn and Thompson utilize their limited budget well – with one notable exception that sadly renders what should be a powerful moment relatively inert – but the close camera angles give an effectively claustrophobic sense of being trapped, while the grimy, colourless tones show you just how bleak it can be to live in a place like this – even before the sniper shows up. 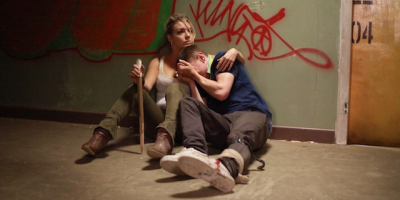 Sadly, the film lets itself down in the final moments, with the credibility-stretching reveal of the sniper coming as more of a “what, really?” than a “wow!”. Despite this, the final battle is as tense and exciting as the rest of the film – featuring particularly creative use of a nail-gun – but we can’t help but feel that the plausibility of the film might have been better preserved had the sniper’s identity remained a mystery, and his location remained fixed at his eyrie in an adjacent building. A sniper up-close isn’t as threatening as one far away, as anyone who’s ever played a first-person shooter will attest (and the film makes some token points about the alleged effects of those sorts of games, too).

Ultimately, Tower Block is a taut and tense thriller, with enough punches and shocks to keep you captivated, while the superb performances from the cast ensure that you’ll be rooting for them to the very end. If, at certain moments, the lack of budget shows, or the script lapses into implausibility, Tower Block on the whole, remains a very impressive Brit-thriller.