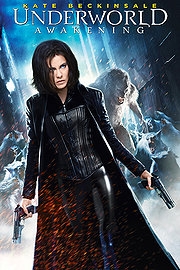 Having taken a break from Selene and her leather-clad buttocks for third instalment Rise of the Lycans (a prequel allowing the filmmakers to instead focus on Rhona Mitra and her leather-clad buttocks), the Underworld franchise returns focus to the 21st Century and Kate Beckinsale’s curvaceous Death Dealer. With new directors Måns Mårlind and Björn Stein well aware of the series’ selling points, Underworld: Awakening promises a new, but not too new, era in the vampire/Lyan war. Six months after the events of Evolution, Selene (Beckinsale) and Michael Corvin (Scott Speedman’s likeness) are preparing to leave the city and start a life together elsewhere. With humanity now in the fray, having finally cottoned on to the raging immortals responsible for an endless stream of disappearances and property damage, Selene is incapacitated when a modified explosive catches her off-guard, just another casualty of the so-called Purge.

Waking in a strange laboratory twelve years later, Selene is haunted by visions she believes to have originated from Michael eyes. Escaping her captors – scientists working at a facility named Antigen, she uses her new-found psychic link to track her visions to an underground compound infested with Lycans. Instead of Michael, however, Selene is faced with a different hybrid: a young girl (India Eisley) found hiding in the shadows. With both the humans and Lycans in pursuit, Selene plans an attack on the Antigen facility with the help of a fellow vampire named David (Theo James) and a disillusioned detective (Michael Ealy) out for revenge in the hope of finding Michael alive. Say what you like about the Underworld movies, they are founded on an undeniably intriguing premise. With a thoroughly researched mythology at its centre, the war between the vampires and the Lycans is practically dripping in potential. The truth is, however, that just as nobody wishes to see two iconic horror monsters vying pitifully for the affections of Kirsten Stewart, nobody really wishes to experience it through endless identikit fight sequences in which one side blasts chunks out of the other with handguns. There are only so many times you can watch Kate Beckinsale fire pistols, gurn to camera or put on or take off a leather trenchcoat before boredom begins to set in.

In bringing Underworld back for a fourth instalment, Lakeshore Entertainment had a real chance to improve upon the formula that had proved so uninspiring throughout the original trilogy. Instead of moving in a different direction – an opportunity facilitated by Scott Speedman’s refusal to return – Awakening merely trudges on in what ultimately amounts to a retread of the original movie, with Speedman’s Michael Corvin kept in limbo by way of awkward stock footage and unconvincing body doubles while business carries on as usual, persumably in the hope that he will eventually return for a fifth instalment. Instead we are treated to a scattering of half-baked newcomers (Charles Dance instead of Bill Nighy, you get the idea), a slightly larger than normal werewolf and an upped gore quotient jarringly at odds with the juvenile story and some unnaturally clingy, modesty-protecting fog. Itself a bizarre hybrid of Aliens and The Matrix, Underworld: Awakening is never quite sure what to do with itself, its own limitations exasperated by unavoidable comparisons to better movies, now decades after the fact. The result – while rather tellingly not the worst in the series – is a movie which acts solely as a place-holder between instalments. With other fourquels such as Indiana Jones and the Kingdom and the Crystal Skull, Die Hard 4.0 and Sre4m struggling to stay relevant, Underworld 4‘s biggest problem is that it doesn’t even try.