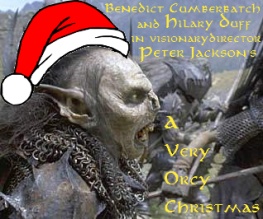 Benedict Cumberbatch plays FlArGHHhgog – a teenage Orc with a grown-up issue. It’s gearing up to Christmas, and once again the symmetrically-challenged members of his town have begun their age old tradition of shouting at and then burning down all the trees in the surrounding area. If only, FlargGHHhgog thinks, there was a way in which they could continue with their fondest ritual, and yet preserve their natural habitat. However, when the murderous (and sexy) GGGHHHHHHHP (Hilary Duff) arrives in town with a murderous (and sexy) score to settle, looking after the nearby shrubbery becomes the least of Flarg’s problems…

Many reviewers have criticised Jackson’s over-dependence on utterly mind-blowing action sequences, so it’s refreshing to see him finally tackle the epic domestic interplay within the Tolkien Universe. The delightful goblin crockery, the endless supernatural paperwork, the way in which an elderly Orc has a bath – all of these things unfold gradually in stunning 2D. Bill Nighy puts in a fantastic performance as town advisor KPLOPPP and Zoe Wanamaker excels in her admittedly tricky role of “Flarg’s subconcious desires”. A surprisingly emotive soundtrack from The X-Factor finalists compliments the breathtaking New Zealand landscape perfectly (in particular look out for Diva Fever’s “When Bloodshed Approaches”), and as the plot reaches its inevitable, heart-wrenching (and sexy) climax you’re left with a beautifully refreshed view of the true meaning of Christmas.

Of course, no film is perfect, and if I’m completely honest I found the constant contradictions to the existing LOTR trilogy distracting. Resurrecting Boromir seemed in rather bad taste, especially seeing as he, quote – “magically came back to life” moments after the massive musical number “As Tolkien Intended” had finished. Still, small plot quibbles aside, this truly is a festive treat all the 18 and overs can enjoy. With more than a few hints at a sequel sprinkled throughout the plot, (we don’t want to give too much away, but think Balrog) we’re already setting our orc-alarms for next year. After all, as FlArGHHhgog would say – “HHHHHjjjjjjjjoooollpss”