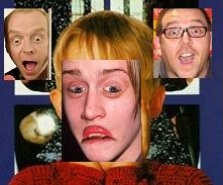 Set thirty years on from the original and after having served his time for the senseless slaughter of his parents and siblings not long after a return from New York’s Plaza Hotel, Kevin McCallister has rebuilt his life as a reputable Real Estate agent in a quiet Kentucky suburb. When local opportunist thieves (played with the usual Pegg and Frost flair) stumble upon his true identity just before Christmas and begin blackmailing demands it’s only a matter of time before McCallister’s cool exterior crumbles and the psycho within is released.

Updating a well-loved children’s classic is always going to be hard, no doubt harder when your father’s reputation is at risk of ruin, but Pretty in Blood director John Hughes III show’s he’s adept at fusing horror, comedy and thrills. Sensibly moving the action from Chicago to Russelville, Kentucky and keeping events to just one chilly Christmas Eve night means Hughes can play with the small town setting, allowing for claustrophobia, especially during one particularly unsettling incident as the thieves discover what’s really in Kevin’s tree house.

Desperate to regain critical favour after the mauling received by gross-out comedy Shaun Wet The Bed both Pegg and Frost excel in roles made famous by Pesci and Stern, foolishly going where no quick-thinking burglar would while eliciting enough sympathy to make us care while they’re burnt, beaten and ultimately disemboweled.

However the film marks a welcome return to the fore for Culkin after seeing his younger brothers Rory and Kieran storm to Oscar glory last year as gay narcotics detectives in Coke, Smack Mountain. Struggling to deal with his past while happily paying the mortgage, his Kevin McCallister is one of steely determination and ice cold chills. Effortlessly moving from charm to chainsaw, it’s a shame Hughes III’s obvious pandering to Studio pressure means he’s hampered by 15 certificate boundaries when it comes to dishing out the detergent in the film’s bound-to-be most talked about scene.

Fans of the original are bound to be up in arms; true fans will indulge their darker side and welcome Kevin McCallister’s return with glee. Let’s hope rumours of the Uncle F**K re-envisioning are true. On this form Culkin has more than just an axe to grind, he’s a basement full of horrors at his disposal too,

Previous: Inception: the Game?
Next: AntiChristmas