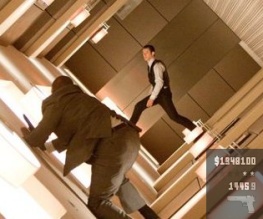 I’ve got some good news, some irrelevant news and some bad news. So, in reverse order:

– It sounds like we won’t be seeing a sequel to Inception. Sigh.
– Mated sea otters hold paws while they sleep so they don’t drift apart. Aww.
– There’s going to be a game based on Inception! YEEEAH!

Unfortunately, nothing’s emerged as to the nature of the game; only that Chris Nolan’s definitely working on one with a team of boffins (whatever happened to that word?) and that it’s in severe danger of being the best thing ever. It’s unlikely that they’ll go down the relatively dull route of rehashing the plot of the film; we’re hoping for a non-linear set-up à la Red Dead Redemption or even an MMORPG. Mind you, a parallel storyline which fed into the original plot or ran alongside it with no crossover (we’re thinking Enter The Matrix, but not shit) could work as well. Unfortunately, with filming on The Dark Knight Rises due to start in a few months it’ll probably be a long while before we get our hands on a totem of our own. Watch this space…

How would you like to see Inception transformed into a game? Let us know your suggestions below!