The Book Of Eli: DVD Review 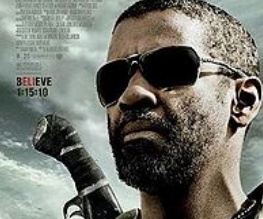 It’s always a risk when film-makers decide to attach heavily religious messages to blockbusters, and it doesn’t get more heavy-handed than in The Book Of Eli. Sadly, this post-apocalyptic story of one man’s quest to bring Jesus-based enlightenment to a wretched humanity comes off as what it is; a sermon with added guns.

This film is rather unlucky in a number of ways. Firstly, it’s a premise that rather relies on the gloomy-but-beautiful cinematography of the post-apocalyptic landscape, which though well designed by Gae Buckley, it bares uncanny similarities to that of The Road, released in the same month. Secondly, it’s a film that takes its mournful mission so very seriously that any moments of lightness seem bizarre and completely jar with the general aesthetic. The sudden comedy cameo team of – believe it or not – Michael Gambon and Frances De La Tour as chipper house-bound cannibals is so mind-bendingly inappropriate that it’s very difficult to actually believe what you’re watching. As soon as they disappear (all too soon we feel, as it means we’re unsure their appearance wasn’t a dream) the descent back into Denzel’s single-minded drudgery is even more difficult to bear.