As most stalkers can attest, it takes a lot of time and effort to terrify someone without making a loud noise and going ‘boo,’ or whatever. In the same way that a romantic comedy can’t always just be a two hour hangout with two people who fancy each other, it’s pretty rare to find a horror movie that gets by on just being creepy (although Don’t Look Now, The Shining, holla). Instead, directors have to rely on that most easily maligned horror device, the “gotcha!”

Though undeniably effective and simple to deploy, the gotcha/jump can be cancerous if used carelessly, undermining both the in-the-moment effect of the piece and its overall integrity. Horror is about getting under the skin, and a sharp visceral reaction can do a great job of jamming it right in there, but a bad one can introduce new elements – laughter, derision, alienation – which undo EVERYTHING. They’ve got all the staying power of a mid-skydive fart; “Oh no! I.. well, I guess that happened. Now; landing.” 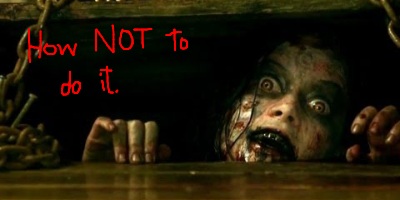 Nope, a really great jump should be like colliding with an albatross. Not only should it really compromise your ability to get through this skydive in one piece, it should leave you shaken forever. You should have nightmares about the albatross, you should be unable to bring up skydiving unless it’s in the context of “once I went skydiving and JESUS I hit an ALBATROSS,” and you should be scared to skydive again because I BET THAT ALBATROSS IS STILL THERE.

But how do you build the perfect albatross? If only there was a vast wealth of information for us to pore through, a library of wisdom containing endless examples of times when someone’s got it r- OH YEAH LOADS AND LOADS OF HORROR MOVIES.

Here are our tips.

Build it Up (Buttercup)

You may think that this entirely concerns mood – lighting, score, setting, what have you – but you’re only halfway there. Those things are all extremely important, but also really, REALLY, obvious. These things should all be in play for every jump, though not always in the way you might think; bright light can be as terrifying as the dark, and absence of score is, if anything, scarier than blaring horns. 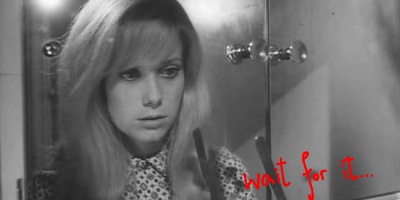 Let me give you an example. Polanski’s Repulsion has arguably the greatest mirror scare of all time, but it’s particularly scary because it comes with an added stomach-sink, as we know our protagonist is pathologically terrified of, and terrorized by, men. And oohp, there’s one now, in her apartment. A great jump should initially shock but also overwhelm you with implications, dragging up a flipbook of information, flashbacks and speculation. That’s why the bottom drops out of your world whenever Killer Bob shows up, or when the camera drops to the floor to reveal Mike standing in the corner, facing the wall.

Things that aren’t quite right are scary, and you can really make a jump stick if you can make that work for you. Take this classic moment from The House on Haunted Hill.

Right?? The initial jolt is fantastic, but where is she looking? And what’s up with the way she moves, like she’s on a skateboard? That’s what stays with you. Unsettling movement is also key to one of my favourite best-kept-secret scares, from underrated sequel Exorcist III: Legion. That crash zoom, that soundtrack, the ghostly nun and her bizarre gait, the cut to a beheaded statue; what’s going on I DON’T UNDERSTAND.

Comprehension and closure are two things that we as a species love to have a handle on. We’re used to our environment being a certain way, and having a certain level of control. We can adjust to new environments when suitably prepared, or when they work within parameters that reflect our own. By nudging any of those parameters, even for just a moment, that’s all shattered. Shits you right up, it does.

Get it on Camera

I put a call out on Twitter for everyone’s favourite jump scares, and among the old standards (Alien, that one thing Saw does with the pig man in every film) and the… well… (The Haunting, Pirates 2), there was a really glaring trend which forced me to have a think about something: why is stuff viewed through cameras so scary?

There’s the Mexican party scene in Signs, which made me scared to look into gardens at night for more or less ever. There’s the aforementioned, queasily angled denouement of The Blair Witch Project. And then there’s the king and queen of skinny horrors; the first reveal of The Descent‘s cave-dwellers, and THAT panning shot around the attic during the closing minutes of Rec – skip to around 1min in.

But why are they so scary? There’s the green night vision filter, I guess, but that’s just because green things are scary and it gives them strange eyes. Deeper than that, though, is that extra layer of involvement introduced by what amounts to a first person perspective, making us participants rather than spectators. That’s us looking in the attic, or looking into the garden, surrounded by adorable Mexican children. And that’s us that that thing is grabbing at.

That’s not all though. Your traditional film stock, digital HD, whatever your filmy poison – it doesn’t really look like your life. It’s too soft, too appropriately lit, not quite.. real enough. But that crappy knockabout camera within the action, that’s ever so real. And although you know – yes, you’re quite sure – that the monster in that cave isn’t real, dragging an alien figure into what feels like an authentic environment makes it that little bit harder to convince yourself.

Blaring horns have a long established reputation as a Scary Bastard Thing, but they’ve reached saturation point. We can’t just blame Inception, trendy as that may be; every mainstream horror film has been at it since the 70’s. And as for string stabs, well, they’d become such a predictable device that those horns were brought in to relieve them. 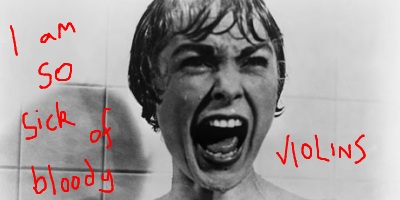 So, let’s try something else. Say you’re revealing a hanging corpse when the light’s switched on, or something horrific is emerging from the darkness over your protagonist’s bed. Try a low bass tone, or a deep pulse. Something sickly, at gut level. It ties into an earlier point; the scare will be more effective if it grabs and slowly twists, rather than simply jolts, and it’ll harder to shake off. You can’t just laugh and move on. This’ll even work for your standard “boo”; without the distracting noise, you aren’t afforded the comfort of thinking about anything else other than what’s happening right in front of you.

Let me tell you about my very favourite scare. It’s from Carrie, but it’s not THAT one. 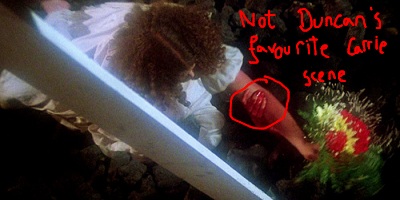 It barely even counts, and many people I’ve talked to about it don’t even remember it. In fact, I had to watch the film again just now to confirm that I hadn’t made it up. But I hadn’t.

Carrie comes home after sort of having murdered her school by accident. But we aren’t scared of Carrie, no. We’re scared of mother. She was right, they did all laugh at us, but she also forced us to look at that TERRIFYING statue of Jesus. And she’s nowhere to be found. Carrie checks the living room, her mother’s bedroom, and nothing. Then she heads upstairs, and still nothing. And then, as Carrie crosses the attic to her room in an agonizingly long static shot, we become gradually aware of a shape behind her door. Is that a sheet, or.. a gown? And what’s that just above it? Then Carrie turns her light on and YEP OH GOD, it’s her.

When I saw Carrie for the first time, at a midnight screening, I felt like someone was slowly pouring iced water down my back. Finding the horror for myself, feeling the dread sink right down through me as I worked out what I was looking at, and what it meant – that’s a whole other kind of terror.