Before we get started it’s important to pick yourself a film to drink to. Batman’s been pretty well-represented on the silver screen, so here’s a quick recap of his finest hours:

So, take your pick, drinks at the ready, and Holy Friday! To the Batbar, Robin!

[Disclaimer: You’ll actually enjoy the film if you pick one of the Christopher Nolans, but you’ll be roaring batdrunk if you go for anything else – up to you…] 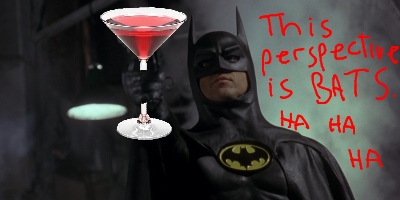 Every time you hear the word ‘bat’.
Alone, or prefixing anything that isn’t ‘man’. Batcave, Batmobile, Batcape, they’re going to start coming thick and fast so get ready, and we’d also like you raise your glass and shout ‘BAT’ with increasingly velocity after each one.

Every time someone makes a horrible pun.
If you’ve chosen Batman and Robin, Schwarzenegger’s Mr. Freeze LITERALLY DOESN’T SPEAK except in ice-based puns so, you know, good luck. 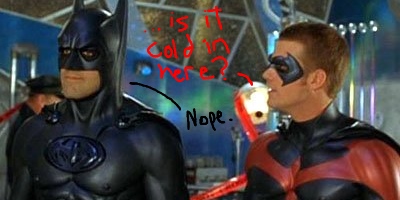 Whenever there’s any kind of sexual innuendo/unnecessary shots of superhero bottom/codpiece/rubber nipples.
Openly gay director Joel Schumacher came under fire for adding nipples to the batsuit, so if you’ve got one of his films this part is going to destroy you.

Whenever things get oddly sexually tense/you start to wonder why Batman made such a young child wear that rubber suit and where exactly Robin sleeps at night.
Each sip must begin with you saying ‘Of course, homosexual and pederastic interpretations have been part of the academic study of the Batman franchise at least since psychiatrist Fredric Wertham asserted in his 1954 book Seduction of the Innocent that “Batman stories are psychologically homosexual”.

Whenever you get frustrated at just what a prude Nolan’s Batman is.
Holey Bat-Fleshlight, Batman, nobody expects the Dark Knight to be a saint! You could be forgiven for thinking that the gritty new Bruce Wayne is just acting out because he’s never actually got any. Get out of that bloody great tank and have yourself a hand shandy, Bruce.

Whenever someone offers some good basic housekeeping advice immediately before doing something evil.
“Always Winter Ice your pipes.” “You should have watered your plants.” “Make sure you use plenty of kitty litter.” Does Batman choose his villains from the Letters page of Home & Garden?

Whenever someone undergoes a transformation (extra sip if they’re a scientist).
Looks like someone didn’t attend the Safety in the Workplace seminar – what were you thinking standing over that uncovered vat of bubbling acid without wearing your regulation high visibility jacket?

When the aforementioned transformee accepts their new life as a ne’er-do-well and reveals themselves in their new homemade villain costume for the first time.
Please also stand up for this, give them clap and shout encouraging feedback on the quality of their seam work and choice of contrasting fabrics.

SMASH IT YOU JOKER

Whenever Batman fights a shark. Quite a specific one, this, so to make it count you’d better chug a whole can of Barracuda Repellent Batspray along with your usual tipple…

Still standing? Then go watch The Dark Knight Rises and apply the same rules. We dare you.