In celebration – if that’s the right word – of his newest abomination That’s My Boy, we’ve decided to delve into the film archives of who nobody has ever called “one of Hollywood’s funniest actors!” It didn’t take long to notice a few patterns emerging, so it doesn’t really matter which Adam Sandler movie you chose. As long as he’s top billing, the following rules will get you appropriately wrecked. 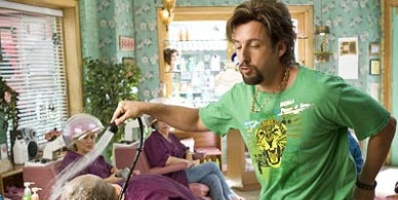 Every time Sandler puts on a stupid fucking voice

The other bread-and-butter rule. Obviously when portraying his own twin sister Jill in Jack and Jill (oh Christ, there are two of him!) he wore an entirely convincing female wig (or it just looked like a male Sandler during a hair-metal phase, we forget), but there’s also Donny in That’s My Boy and Zohan in You Don’t Mess With The Zohan. A sip every time you become aware that it’s a wig. 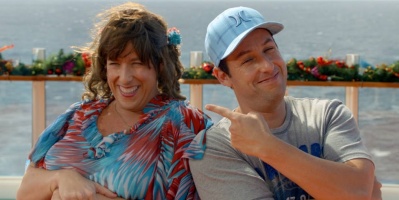 This might sound quite specific, but it’s oddly prevalent throughout his films. As Homer Simpson once enthused about men getting hit by footballs, “it works on so many levels!” Sandler misses all of them. Two sips for proving Homer Simpson wrong.

Every time Sandler has to reconnect with someone 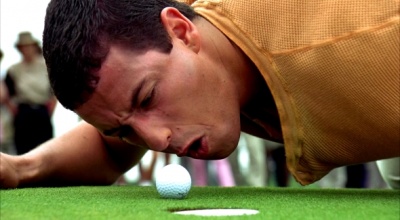 Every time Sandler’s name ends in a ‘y’ or ‘ie’ sound
Adam Sandler, has, over the course of his career, played characters named *deep breath* Schecky, Louie, Billy, Happy, Archie, Robbie, Bobby, Sonny, Nicky, Townie, Barry, Davey, Henry, Clasky, Charlie, Lenny, Danny, Donny, Lenny (again), Smitty and Donald the Capuchin Monkey. That is WEIRD. So you know you’re taking a little drinky every time someone calls him by something ending in ‘y’ or ‘ie’. In fact, it’s so weird you can take three. 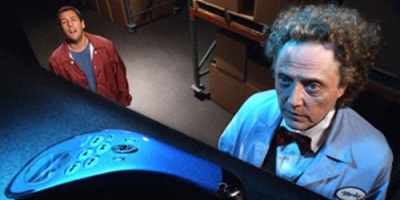 CHUG IT, YOU ZOHAN

Every time he drags a respectable actor down with him:
It’s one thing for Adam Sandler to debase himself, repeatedly, and with complete abandon for his own popular image, but when it starts impacting on the actors and actresses we love and adore, that is not okay. Christopher Walken in Click; Jared Harris in Mr. Deeds (in which he’s made to do an Australian accent; that’s the SINGLE MOST BRITISH ACTOR WE HAVE, for context.); Al Pacino bafflingly agreeing to play (a presumably mentally ill version of) himself in Jack and Jill who finds Adam Sandler’s Jill attractive… Not to mention whatever dirt he has on Steve Buscemi, who has appeared in several. If you still have any drink left, down it whenever one of these venerable but misguided actors appears. Do it for Pacino.
Previous: The Sweeney
Next: Anthony Mackie cast in Captain America sequel