Taken 2. But why would you subject yourself to any of Liam Neeson’s new films (except The Grey) without a really massive drink? Well, now you don’t need to! CAUTION: do not attempt to ski after playing this drinking game. " />

Who doesn’t love Liam Neeson? Whether you’re interested in guns, Jedi, guns, Jews, guns, wolves or guns, the former Helen Mirren-boffing superstar has you covered with his eclectic (but largely weaponry-themed) filmography. All that’s missing is whatever they call a wee dram in Ireland… 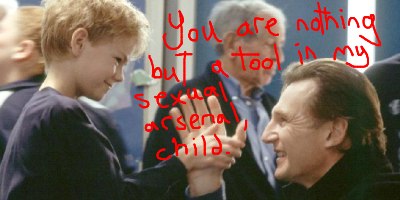 Whenever Liam is fucking massive. People tend not to notice this, but the 6’4 actor looms over most of his co-stars and even some of his sets – thousands of dollars were spent rebuilding the various spaceship corridors in The Phantom Menace when it became apparent that Qui-Gon Jinn could see over most of them.

Whenever Liam massacres an accent. America is full of hulking craggy-faced men who should probably retire, why do you need to keep casting him as a Yank? That Northern Irish brogue is about as easily concealed as Bloody Sunday.

Whenever Liam plays a hella sexy dad. Why doesn’t this happen more often? Adam Sandler has cornered the market playing really shit dads in massive t-shirts, but if Neeson’s sporting a sprog onscreen it only intensifies his growly Celtic charm. Maybe he sprays them with pheromones, or makes them cry onto his shirts so they shrink against his chest, or something. 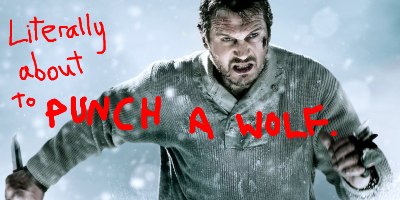 Whenever Liam is a motherfucking one man army. “I will find you, and I will kill you. Possibly while appearing as a giant lion who’s actually Jesus. Or while battering an entire iceberg full of wolves.”

Whenever Liam ascends to heaven. We’ve never seen a gruffer or more inexplicably un-Greek Zeus, plus there’s that Aslan voice again. And he’s even the spiritual inspiration for Transformers – JJ Abrams decreed that Optimus Prime’s body language should be based on Neeson’s. LAD.

Whenever Liam’s actually a massive softy. Taken? All about the kids. Love Actually? Same again, except this time it isn’t even his bloody child! Narnia? Cut my mane off and stab me in the face, Tilda Swinton, because I’m a mimsy Christian analogue and I’ve got to turn the other massive leonine cheek. 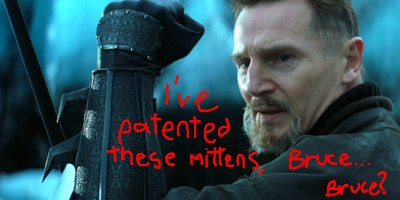 Whenever Liam plays a heroic mentor figure. Sometimes we get the feeling he should just have been a teaching assistant. Gangs of New York, Star Wars, Narnia AGAIN (you can justify anything using Narnia, JUST LIKE WITH THE BIBLE) – even Schindler’s List, sort of. Although my teachers never rescued me from the Holocaust, because they were lazy.

Whenever Liam is suddenly not a hero! Gotta love those ‘oh Jesus, am I typecast? Quick, make me a bastard!’ career moves. Most notably, he changed his mind halfway through Batman Begins: “Oh god, am I another heroic mentor? Quick, Chris, make it so I turn out to be Ra’s al-Ghul! …Oh fuck, I can’t pronounce it.”

Whenever Liam wants to reinvent himself as a stand-up comedian. Fairly specific, this one, but it’s literally the only good thing about Life’s Too Short. “As I said before, I have full-blown AIDS.”

DOWN IT YOU PROTESTANT:

Whenever Liam’s wife dies. What? Love Actually, The Grey… we think Rob Roy‘s wife gets raped too, which is similarly grim. Have you never heard of life imitating art, Liam? For all our sakes, STOP MAKING FILMS ABOUT ALIENS. Just in case.

If you survived all that, watch The Next Three Days and waterfall Liam’s entire (mercifully brief) appearance. See you next week!

Previous: Taken 2
Next: The Perks Of Being A Wallflower