Realising that selfishness is an inherent property of humanity, Star Trek envisaged the need for the Temporal Prime Directive: Don’t fuck about with time. The Star Trek universe is so lousy with velour-suited Doctor Whos that they actually had to come up with a law, which everybody breaks constantly. Inspired by the fantastic Looper, here is a list of films that decide to break the Temporal Prime Directive with such aplomb that they put one in mind of a 4 year old with a nail gun. 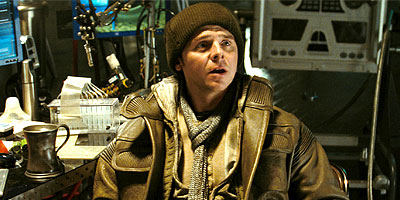 It’s only fitting that we start with the franchise that gave us the Temporal Prime Directive. When Leonard Nimoy’s Spock is sent back into the past, he decides to start screwing around. When Future-Spock and Kirk-Baby bump into Scotty on Hoth, the Vulcan gives him the equation that will allow for teleportation over exceedingly far distances at light speed, then informs him that he will invent this very equation in the future, and that it will be his highest achievement in life, his magnum opus. Working towards this incredible goal would have made him a smarter, better man, and Spock has robbed him of any sense of achievement.
For what? Spock punched in the equation right then and there, he could have sent Kirk on without robbing Scotty of his life’s joy in a blink of the eye.

That was just for kicks. 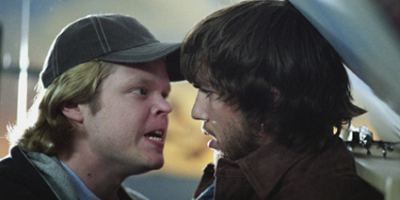 In The Butterfly Effect, Ashton Kutcher plays Evan, a man who jumps back in time within his own consciousness. Evan attempts to change his lot for the better, but his blundering around in the past returns only more tragic futures for him. In one of the last universes he makes, he’s actually managed to make every single person in the universe happy, healthy and sane, at the relatively small cost of his own arms. “Fuck that!” Kutcher proclaims, and continues to try and create a world in which no one wears clothes anymore. Like that episode of Sliders. An ode to Back To The Future, Hot Tub Time Machine is kind of a naff movie, but it has its moments of 80s nostalgia. I spent that decade drooling and pooping my pants (as did everyone else, I understand. Cocaine is a hell of a drug.)
After spending a night in the 80s, bald douche-bag Lou decides to remain behind in the past, getting a chance to relive his life. When his friends arrive back in 2010 they discover that Lou has a) Invented Google and named it after himself b) Bagged a hot wife and a boat and c) Created 80s rock group Mötley Crüe. GENIUS! 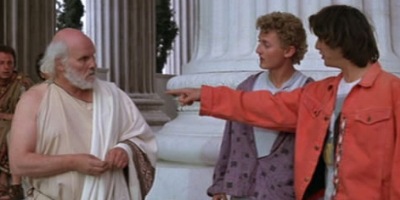 Understanding that they will one day become Masters of the Universe, or Highlanders or something, Bill (Alex Winter) and Ted (Keanu Reeves) are presented with a time traveling metal box, which historians informs us is called a “Phone Booth”. The pair, displaying all the subtlety of a neon sign advertising a whore house, proceed to collect every prominent figure from history, causing untold ramifications throughout time.
Their driving motivation? They want extra credit on a school report.

#6 – Source Code – Jake Gyllenhaal demands to die, ends up wearing the skin of another dude instead 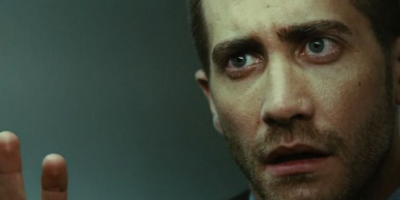 Careful now, this one will really spoil the film for you if you haven’t seen it already.
In the climax of the film, Jake Gyllenhaal‘s character royally screws with time, apprehending a criminal before the train Jake keeps time-jumping into can be blown away. As a reward (from Mr. Deus Ex Machina) he is allowed to remain in an alternate timeline in his shiny new possessed body (since his own now lacks a penis, and he wants it dead) and makes out with Michelle Monaghan for all eternity. 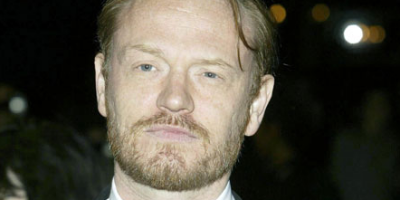 Near the end of this travesty of a film (which I inexplicably love) little genius boy Will suffers a fate worse than death and grows into Jared Harris (Sherlock Holmes: A Game of Shadows). Since his only friend is a mutated Gary Oldman (that guy really gets around) he decides to build a time machine, presumably to go back and stop himself growing up as the fourth member of The Lone Gunmen from the X-Files. Will’s dad turns up and has to beg Will to let him go back in time to save his family from a spaceship explosion.
Considering he was about to send a perverted space monster back in time, Will seems suddenly reluctant to let his dad rescue his mother and sisters (and Matt le Blanc, for some reason,) and it’s not until daddy convinces the crybaby that he loves him that he is allowed to save the day. 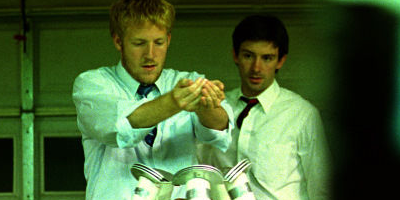 Shane Carruth’s utter mind-cuss makes fantastic use of time travel on a shoe-string budget, with characters expressing the same moral fibre as Gordon Gekko from Wall Street. Their plan, to take advantage of exploding and crashing stock prices, is beautiful in its simplicity. Their downfall comes after they get too greedy and begin to play around with time too much. Not like me. I would never get too greedy. Only just enough to manipulate my knowledge of future events to screw people out of massive amounts of money. 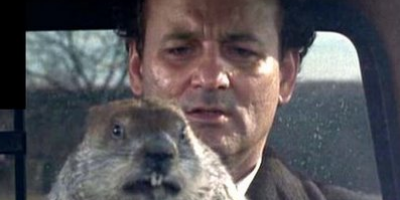 The Harold Ramis classic, this is a gobsmackingly good movie. Bill Murray is on such fine form that he makes even Andie MacDowell tolerable. It is perhaps his wry and indifferent charm that allows the viewer to excuse a few of his more questionable uses of his eternally-repeating day. One might be able to go so far as call him a sexual predator, when he manages to seduce a local girl by exploiting the information he learns from her on previous Groundhog Days. It is also implied that he repeats this method whenever he feels getting his end away.

The only person this reprehensible tactic does not work on is Andie MacDowell, although Bill Murray presumably spends years trying to enter her without fruition. Speaking of sexual predators, The Lake House manages to take the coolest of all sci-fi concepts, time travel, and make it exceedingly awkward and boring. Revolving around a mailbox that transports letters forwards and backwards in time, between Sandra Bullock and Keanu Reeves (heeey he popped up twice!), the film climaxes (a poor choice of words) when Miss Congeniality invites Neo to dinner, 2 years in his future but only a day for her. Then she realises that the man who died in her arms after a car crash she witnessed two days earlier (drum roll please) was none other then Keanu Reeves himself. WHAT ARE THE ODDS!?

Now playing God, whats-her-face proceeds to warn Keanu Reeves through the magic mailbox about the car accident, and he suddenly pops up behind her like an axe murderer, his fate now altered. And hey, if she ever gets sick of him, she can just send a letter bomb back in time and none of it will ever have happened.

#1 – Back to the Future Parts I, II and III – Marty and Doc create perfect lives for themselves, hypocritically judges anyone else who wants to do the same 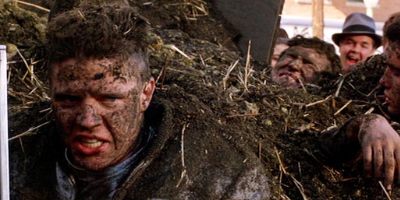 What else? You knew it was coming.

In Back to the Future Part 1, Marty McFly travels back 30 years to 1955. Accidentally stepping into the moment when his parents fell in love, Marty has now endangered his own existence and begins to fade away. Luckily, he manages to get them together at the expense of potential-rapist-turned-butler Biff. Miraculously, he not only saves his existence, but also makes his father less of a pussy and rich, and his mother thin. He even bags himself a bitchin’ truck and invents rock-and-roll (Chuck Berry and the black community must have been so grateful for saving them the effort). Despite being warned against it, Marty has managed to manipulate time and get a dream life.

In Back to the Future Part II, Marty and Doc travel 30 years into the future (2015. Oh Christ that’s only 3 years away) and Marty decides his amazing new life back in the 80s is lacking infinite amounts of cash, so he buys a sports almanac, planning to take it home and cheat at sport just a little less than Lance Armstrong. Doc scuppers these plans, but potential-rapist-turned-old-man Biff overhears and decides to a)do exactly what Marty was planning on doing and b) do exactly what Marty did in Back to the Future Part 1 – namely improve his crappy life. When Marty and Doc return to an alternate 1985 in which Doc is committed and Marty’s father is dead, their motivations for stopping Biff are entirely for self-preservation. And who can blame them?

Finally, in Back to the Future Part III, despite all of his own warnings about the Temporal Prime Directive, despite his tantrums and his yelling and his diatribes, Doc proclaims “Fuck that” and proceeds to make a bitchin’ steampunk flying timetrain and travels through time, creating millions of paradoxes and shitty alternate universes as he goes. Great job, Doc. 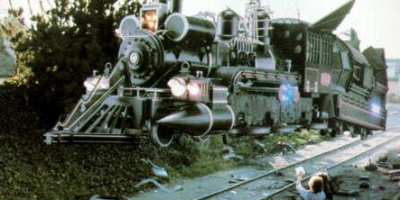 “Farewell, integrity! I’m off to cheat on the stock market and meet Humphrey Bogart or something!”

Previous: Adam Sandler is one of the Ridiculous 6
Next: Infidelity: Sex Stories 2