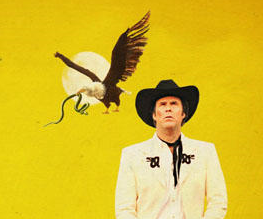 The marketing machine for Will Ferrell’s upcoming comedy Casa De Mi Padre is starting to kick in gear – in the last couple of weeks we’ve had a (rather marvellous) teaser trailer and a (rather enigmatic) poster, but you know what they say – why have a poster, when you can have TWO MORE POSTERS?

Taking on the none-too-easy task of getting mainstream America into the cinemas to see a subtitled film, the new marketing is happy to tip their hats to the challenge with the tagline – “funniest movie you’ll ever read”. We like that. We like that a lot. We’re also very much enjoying the snake-being-eaten-by-a-mighty-eagle motif they’ve got going on. Did someone say commemorative tattoos?

Casa De Mi Padre is out in all its large hatted, gun totin’, burrito-smashing glory in 2012. Will you be reading your asses off?

Previous: Orange(Wednesday)s And Lemons #51
Next: Oscars 2012 get a poster