50 Cent and boxer Floyd Mayweather pairing up for film 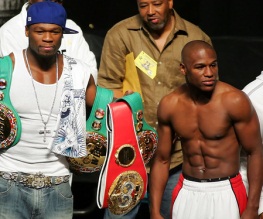 Rapper 50 Cent has brought on boxing legend Floyd Mayweather as an investor in his latest project, action film Tomorrow Today. The hip hop mogul has held off on his rapping career recently, appearing at Sundance film festival to promote Gun, Things Fall Apart and Caught in the Crossfire, the content of all three pretty much self-explanatory by their titles.

The rapper, whose real name is Curtis Jackson, has said he will write and direct Tomorrow Today, which will be filmed in Mayweather’s hometown of Grand Rapids, Michigan. “We’re going to do what we normally do,” Mayweather said. “Sit in a room and brainstorm and try to come up with new ideas, be creative and just work together and try to be positive. That’s the main thing. It’s about working hard, being positive, and working together.”

Previous: Cruz and Bardem have first child
Next: Tangled