A Good Day to Die Hard gets new trailer 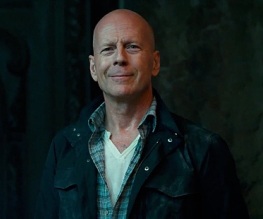 A Good Day to Die Hard sees the inevitable eventuality of Die Hardest pushed further into the future, and for now is happy to content us with a brand spanking new international trailer. Dropping pappy McClane off at the airport, Die Hard 4.0‘s Mary Elizabeth Winstead sets up the trailer (and presumably the entire film) as one giant punchline when she implores Bruce Willis to not fuck shit up on his trip to Moscow. Apparently now only able to communicate in Die Hard-isms, he exits the car murmuring “Yippee-ki-yay” under his breath. Ruh-roh.

Informing an unexpectedly jolly cabbie that it’s his first time in Moscow, after 12 seconds we can safely assume it will also be John McClane’s last, as Russia’s capital is subjected to the kind of Euro-destruction not seen since Paris paid the price for losing Liam Neeson’s daughter. Joining forces with son Jack (Jai Courtney), the two will no doubt turn dispatching countless hoards of grimly dutiful henchmen into a warm father-son bonding experience, as you do. Well, it is hard to picture Bruce Willis giving a lesson in how to properly bait a hook.

Closing the trailer as Beethoven’s ‘Ode to Joy’ blares over the mayhem, Bruce Willis reassures his son that “nobody’s gonna die today”, before the duo unload a pair of machine guns. While Jack McClane is visibly a fully-grown man, it’s nice to see that Bruce Willis’s parenting remains endearingly over-protective.

Previous: X-Men: First Class 2 won’t be directed by Matthew Vaughn
Next: Adam Sandler is one of the Ridiculous 6