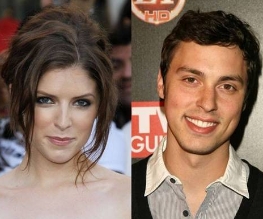 Late last year it seemed like the only thing you heard about was the world coming to an end. It didn’t. Bloody Mayans.

The upside? Well, now we get to laugh about it! A whole host of new comedies concerning end of the world scenarios are set to be released this year, and one of them is Rapturepalooza.

Why are we looking forward to this? Because it stars the very talented Miss. Anna Kendrick (you might remember her bit role in Twilight, but better yet from George Clooney’s Up in the Air and the recent release Pitch Perfect) who has been making headlines and grabbing attention with her acting prowess. Kendrick plays Lindsey who along with her boyfriend Ben (John Francis Daley from Bones) get caught in the middle of a world undergoing the Rapture. If you have no idea what this mean, here’s the sitch : the Bible prophesies that one day Christ will return to Earth in order to escort true believers to heaven leaving all the reprobates behind to suffer thorough an apocalypse with the Antichrist (played here by Craig Robinson) at the helm. Rapturepalooza will follow the couples high hopes of destroying the devil and saving the world.

The screenplay has been penned by Chris Matheson (of Bill & Ted’s Excellent Adventure fame) and will feature a whole host of comedic talents like Ken Jeong (the crazy and regularly naked Asian dude in The Hangover & Hangover : Part II) and Rob Corddry (from Hot Tub Time Machine and the new Warm Bodies movie).

Released by Lionsgate it will hit theaters sometime this year. But until then here’s the Red Band trailer to whet your appetite.

So what do we think? Worth a look? Or are you predicting a hit-and-a-miss?

Previous: Sam Mendes will not direct Bond 24
Next: 12 In A Box