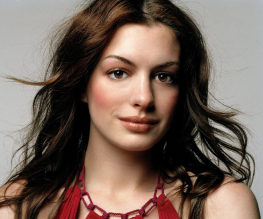 Anne Hathaway has signed on to star in a romantic comedy called The Low Self-Esteem of Lizzie Gillespie. There is no release date or immediate plans for production so the film is very much in the early stages of development, but we do have some limited information on the plot.

The script, written by The Office‘s Mindy Kaling, concerns the trials and tribulations of an unlucky-in love singleton (played by Anne Hathaway) who suddenly finds herself pursued by the man of her dreams. There are reports which suggest that Mindy Kaling may appear in a cameo or small supporting role but they haven’t been confirmed.

Following her recent turn in massive blockbuster The Dark Knight Rises, Anne Hathaway appears to be mixing it up with this indie project and whilst she is now widely regarded as a serious drama actress we haven’t forgotten her lighthearted breakout role in The Princess Diaries. After a run of intense roles in films like Les Misérables and One Day, we welcome her return to the genre which saw her star rise. We’re equally approving of the possibility of Anne Hathaway sharing screen-time with Mindy Kaling; we have a feeling that with the two actresses’ respective knack for comedy they will bounce right off each other.

The film has yet to secure a director but the feature will be executively produced by none other than John Malkovich’s production company Mr Mudd. That’s all the information we have right now but we’ll be keeping you up-to-date as more details about the film are released.