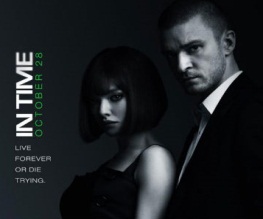 Award-winning author, Harlan Ellison, is suing New Regency and In Time writer and director Andrew Niccol. The film, due for release next month, is set in a future society, where every human body stops the aging process at 25 years old. Due to genetic modification, each individual will only survive one more year past their 25th birthday…unless they can buy more time. Simply put, the rich live forever, the poor die young. One man, Will Salas (Justin Timberlake), is just trying to make an honest living by working hard (and being paid in time), but the company goals are becoming impossible. After a chance meeting with a mysterious stranger, Will becomes accused of murder; cue the standard amounts of running, car chases and kidnappings of Amanda Seyfried (everyone does it). Ellison is arguing that his hugely popular science fiction novel of 1965, Repent, Harlequin! Said The Ticktockman, has been used as a basis for the In Time storyline. Just last year, Ellison entered into an agreement to adapt his novel into a screenplay for a motion picture version. He is now arguing that In Time will jeopardise the official adaptation. Hollywood lawsuits are more common than botox treatments, but rarely ever result in a pay-out due to lack of similarity between the works.

However, Ellison does seem to have a solid case. He argues that the film copies his novel in the sense that it is set in a future society, “where everyone is allotted a specific amount of time to live” and the government who control the population’s lifespan is known as the “Timekeeper”. Other similarities are drawn, including the way citizens die when their time runs out, protagonist rebellions, the manipulation of time and so on. He also uses the compelling evidence of a critic’s assumption after seeing In Time at an advance screening; presuming that it was indeed based on Ellison’s novel.

His demands are steep; including an injunction to prevent the release of the film, and the destruction of all copies. Watch this space to hear how it all pans out.