BAFTA 2013 nominations; a lot of Skyfall 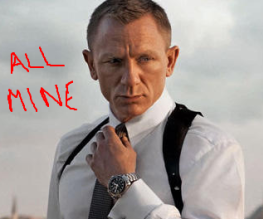 This year’s BAFTA nominations have just been announced, and the Best Actress category looks set to be a scorcher. Emmanuelle Riva for Amour, Helen Mirren for Hitchcock and Jennifer Laurence for Silver Linings Playbook are among the competitors, whilst Anne Hathaway and Judi Dench square it up for Best Supporting Actress. Cat. Fight. Frankly, they rain on the nominations for Best Actor, because Ben Affleck’s nomination for his performance in Argo seems a little stretched. What about the trolls in The Hobbit, guys?

On the other hand, hello Best Supporting Actor nominees you absolute dynamites. Alan Arkin, Christoph Waltz and Javier Bardem, where do you even start. Outstanding British Film seems to be having a bit of a mare, however, as Anna Karenina seems to have got lost on its way to the Razzies (six nominations is really just not cool). Naturally, Les Mis is being pitted against Life of Pi for Best Film, with a mighty nine nominations each. Thankfully someone’s thrown a tantrum so we’ve also got Argo in there. Phew.

Of course, Skyfall will probably take the crown for every category, if it’s up to the British film industry and, like, the world, which really just isn’t fair because it’s James Bond man, but there doesn’t seem to be another truly deserving winner in the Outstanding British Film category. And whilst Tarantino deserves every best award under the sun, Ben Affleck’s nomination for Best Director is a well-deserved title.

Meanwhile, over at this year’s Razzies, the last of the Twilight films sweep up every nomination ever, including two for the Worst Screen Couple. We’re voting for Taylor Lautner and the baby-child-thing Mackenzie Foy.

Cast your eyes on the full list of this year’s nominations. Yippeeee-oh, wait… it’s pretty predictable.

So, are this year’s nominations an excellent call of judgement or a series of drunken decisions? Leave us a comment and tell us what film you think deserves more credit.