Baumbach and Eisenberg reuniting for While We’re Young? 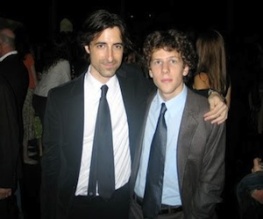 An uptight film-maker and his wife find their lives changed by a free-spirited younger couple. Sounds like the perfect project for Noah Baumbach don’t you think?

Ben Stiller, who is carving out an indie career after the success of Greenberg has already been cast by Baumbach in While We’re Young, as the documentary film-maker who befriends and is influenced by a younger pair. But rumours now abound that Jesse Eisenberg, catapulted to mega-fame after the success of The Social Network and star of Baumbach’s indie success The Squid and the Whale, will play one half of said hipsters. Naomi Watts is also in talks to join the cast, as Stiller’s character’s wife.

Eisenberg has been a little quiet since The Social Network, but will soon star in 30 Minutes or Less as a kidnapped pizza delivery guy(!) before moving on to a Woody Allen project set in Rome; however While We’re Young seems right up his street, with Baumbach being the master of this particular brand of excruciatingly awkward humour.