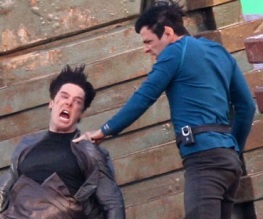 Blimey, this is quite a morning for spectacular reveals – not only has a massive, beautiful Dark Knight Rises trailer landed, but we’ve come across a compelling rumour concerning a certain bicycle-faced heartthrob and his role in the next Star Trek film.

We know many people won’t want to have the nature of the Sherlock star’s character revealed, which is why we’re pontificating about stuff like Batman, but if you’ve read this far you’re probably interested. Still, as a final line of defence we’re going to shove in a photo of Bandersnatch looking unfairly alluring and save the spoilers for after the jump – if you can stick with us past a photo of Sherlock gripping a violin like he wishes it was your thigh/breast/penis/erogenous zone of choice, then you’ve earnt your juicy serving of spoilers. Hello again. No more killing time, here’s what you’ve been waiting for – according to TrekMovie, Benedict Cumberbatch will be playing iconic Trekkie villain Khan Noonien Singh, made famous on both the big and small screens by Ricardo Montalbán. Benicio Del Toro’s South American lineage made him a consistent choice for a revivified Khan during the brief period in which J.J. Abrams was courting him as the villain, but the cryogenically-frozen superhuman was largely written off when Cumberbatch joined the cast back in January. More fool us, eh? That iPhone audition must have been even more impressive than we’d imagined.

Other spoilers to come to light include the fairly open secret that Leonard Nimoy will be returning to the fold as Spock Prime (and racking up his eighth Star Trek movie appearance in the process) and that the Klingons will finally be making an appearance after being, bar a brief allusion during the Kobayashi Maru, absent from 2009’s Star Trek reboot. Neither of these stories is much of a surprise, although we probably would have written about them properly if we weren’t busy thinking about Benedict rising out of a cryogenesis chamber. Mmm… icy…

What do you make of this shock casting news? Let us know below!