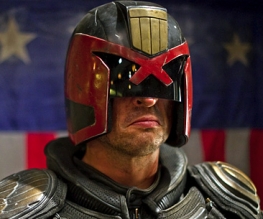 The new red-band trailer for Dredd, starring Karl Urban (who played Julius Caesar AND Cupid in both Xena: Warrior Princess AND Hercules: The Legendary Journeys, what a man) has just premiered at Comic-Con, and it’s fucking rank. Even Olivia Thirlby, as Judge Dredd’s pet mutant Cassandra, looks vaguely vommy, and as perplexed as we are as to why all the blood is so Twilight-sparkly. That aside, we’re just grateful it’s not as shit as the last one.

Dredd is based in a violently futuristic city where the po-po go cray-cray for control, and start shooting jaywalkers and the like, because who needs a police force when vigilantism is so much more efficient? Like Bobcat Goldthwait’s God Bless America, but with more spandex, which obviously = more fun. Forcing itself into contemporary relevance, the plot is based around exterminating the dealers of a dangerous reality-altering drug called SLO-MO; these are stained-with-desolation individuals we see Dredd dispatching above. Lena Headey (Game of Thrones) plays Ma-Ma, who is unfortunately not the benevolent and bootylicious gospel choir leader that name implies, but the biggest trafficker of SLO-MO to the idiot residents of Mega-City One. So, while it’s no Marvel explosion-romp, Dredd at least promises a solid 3D coating of blood on audiences come the autumn. That’ll do. LIKE ITS CRACKING POSTER, WHICH IS JUST FULL OF COOL SHIT.