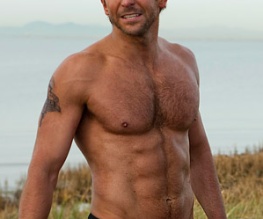 After months of scientific experiments possibly involving the Large Hadron Collider, People Magazine has finally come to a decision and named Bradley Cooper as OFFICIALLY the sexiest man currently alive. Phew! Must have taken ages to individually visit all the 3.5 billion men on the planet to check out their sexiness quota!

Apparently, Bradley nabbed the prize due to meeting a variety of criteria. According to People, he can “whip up dinner, take you for a spin on his motorcycle and whisper sweet nothings in French”. Woah! Hold the phone. He can whip up dinner?! That is seriously sexy.

Bradley – who has recently been cast as a probably very sexy Satan in the upcoming Paradise Lost film – responded to winning by saying “My mother’s going to be so happy”. It’s a well known fact that it is every mother’s dream to have her son named Sexiest Man Alive (coming in a close second is having one’s daughter win Rear of the Year). You can imagine Bradley coming home with the trophy (we assume he gets a trophy) and his mother opening the door tearfully, running to meet him, grasping him in a hug and whispering softly in his ear, “So proud…so proud”.

All jokes aside, watch this video before you start drafting your letter of complaint about how Ryan Gosling should have won. And for God’s sake, keep your smelling salts nearby.