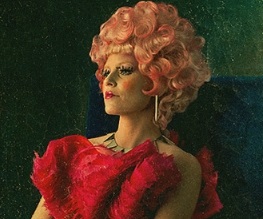 We hadn’t forgotten that The Hunger Games: Catching Fire was heading to cinemas in November 2013 but, just in case YOU had, the kindly folks at Color Force have unleashed some brand-new posters for you to run your eyes all over. Huzzah!

And, as if that weren’t exciting enough, the makers of Jennifer Lawrence‘s fantastic dystopian adventure have decided to shun the darker, grittier, dead-childrenier elements in favour of the fantastic fashion and propaganda of Panem with a brand new Capitol Couture blog.

Gracing the front cover of the first issue of ‘Capitol Couture’ is Effie Trinket (Elizabeth Banks), who fans of the franchise may remember primarily for her warped political sentiments, her genuine fondness for the deadly Hunger Games or her utterly mad hair. And, before you poor sad schlubs even THINK about passing a fashion-based judgement of your own on Effie’s unique style, check out what the writers of Capitol Couture have to say about it first:

“Head to heel in couture, Effie enchants in an exploding silhouette of chiffon and organza blooms. Never one to waver in her fashionable footwear, her heel-less boots are shod with a golden horse-shoe platform.”

Yup. That’s couture talking, right atcha! Click on the posters of Effie Trinket, Caeser Flickerman (Stanley Tucci), Katniss Everdeen and Peeta Mellark (Jennifer Lawrence and Josh Hutcherson) below to see them in all their full-sized glory. Go on…

Warped fashion shoot meets propaganda at its very best, eh? Getting ready to exploit the lives of the under-privileged has just never looked quite this good before.

Jennifer Lawrence, Josh Hutcherson, Stanley Tucci and Elizabeth Banks will be joined by an all-star cast, including Woody Harrelson, Liam Hemsworth, Philip Seymour Hoffman and Sam Claflin, when The Hunger Games: Catching Fire launches a Victory Tour straight into our cinemas on 22 November 2013. We can’t wait!