Brian Butterfield to Get His Own Movie? 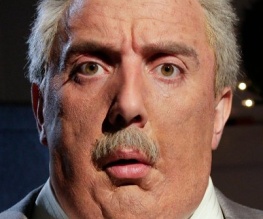 It may not be treat day (Saturday is treat day), but we’re still bloody getting a bloody big treat; sexy-voiced, tall-bodied British comedian Peter Serafinowicz has hinted in an interview with Empire that he’s writing a feature film based on one of the characters from his sketch show, exquisitely inept entrepreneur Brian Butterfield.

For those still trying to place the name, he’s one of those guys with an endless list of ‘X in Y’ roles. Dwayne in Spaced, Tex in I’m Alan Partridge, Pete in Shaun of the Dead; not to mention the voice of Darth Maul and, best of all, the dubbed voice of Pele in an impotency awareness advert. He’s also the co-writer of the sublime Look Around You and, shockingly enough, The Peter Serafinowicz Show.

Details are sketchy at this stage, with Pete’s only word on the subject being “I’m writing a feature film, with my sketch-show character Brian Butterfield as a detective.” So all we can do is speculate. Is he hired to find out whether someone’s husband is having affair, or because someone’s daughter’s run away with gypsies? And which of his array of disguises will he use to blend seamlessly into almost any environment? Firefighter? Explorer? Infant? Christmas Man? Theatrical Ghost? Tea Lady? ALL OF THE ABOVE?!

For the unitiated, check out the compilation of Buttersketches below, and prepare to find items from the Diet Plan Treat Day making their way into your daily vocabulary. Pints o’ Cream!