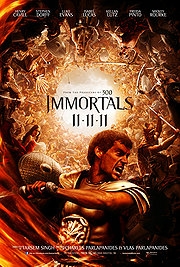 The Greek myths provide us with some of the most exciting, complex, filthy and oft-recycled narratives in human history. Still, who needs all that if you can just use some of the same names and then spend fifty million dollars on fight scenes? Tarsem Singh’s Immortals has the curious distinction of being a significantly worse film than 300, generally accepted to be the last bastion of flagrant Hellenic cultural rape – and it doesn’t even have Gerard Butler’s abs in it. Make like King Aegeus, and throw yourself off a bloody cliff rather than watching Immortals. Many years ago, saith the Crusty Voiceover Dude (John Hurt), there was a war in heaven – the immortal victors got some snazzy gold togs and renamed themselves gods, whilst their luckless opponents the Titans were shackled beneath Mount Tartarus for eternity. That was the idea, anyway. However, the ruthless King Hyperion (Rourke) has other plans; he and his army of masked fanatics (HELLO, Xerxes) intend to release the Titans and end the reign of gods. There’s just one catch – only one weapon in the mortal realm (a bow forged by Ares himself) will destroy the Titans’ prison, and all Hyperion knows is that it’s ‘somewhere in Greece’.

Enter Theseus (Cavill), a virtuous peasant who has been taught to rep the little guy, not take any shit and fight like an absolute badman by Crusty Voiceover Dude (hang on, if he’s just a peasant how come he was doing that voiceover? It’s almost as if there’s going to be a massive reveal). The gods are sworn not to reveal their true nature to humans (although they can appear as, eg, crusty old dudes HINT HINT HINT), even if their failure to intervene and stop Xerxes Minos Hyperion leads to their own downfall – but if anyone can stop the tide of bastards seeking to topple Olympus then it’s Theseus. Who doesn’t go to Crete or fight a Minotaur, for the record, except one with a head made of wire. In fact, he’s nothing like the proper Theseus at all… Doesn’t it just sound utterly bloody dreadful? Taking inspiration from every substandard sword’n’sandals film of the last decade whilst ignoring its genuine source material utterly, Immortals is what you’d get if you took the capricious and ill-thought-out pantheon from Clash of the Titans, the absurd swordplay and childish masks from 300 and the self-indulgent melodrama of Troy, added superlative quantities of greasy, cloudy export-only olive oil and chopped them all up into some godforsaken moussaka of nonsense – Tarsem Singh’s vision of Greece is, if anything, more of a mess than the average Athenian’s pension right now. Even if you can get over the outrageous way in which the film plays fast and loose with the half-dozen myths on which it nominally draws the resulting Hellenic Megazord is simply dull.

Seriously. It should be impossible to make a film like this boring – just to recap, Mickey Rourke’s charging around trying to unleash the Apocalypse whilst Superman tries to stop him with a bow FORGED BY THE FUCKING GOD OF WAR – but somehow Tarsem Singh manages it, which I suppose is an achievement in itself. Henry Cavill writhes around with a spear and delivers crudely whittled wooden lines into the middle distance (could he have been using an autocue?), Rourke is reduced to roaring and slobbering like literally every other megalomaniac barbarian king you’ve ever seen and anodyne oracle Freida Pinto is, as usual, utterly pointless. Pinto’s torment on set must have been veritably Cassandraic – her visions presumably revealed Immortals‘ inevitable critical mauling, but there was nothing she could do to turn the good ship Immortals away from the cliffs of ‘Certified Rotten’. The release of this review has been delayed three times, presumably so a reasonable number of people go to see Immortals before they actually read anything about it. Distressingly, I imagine most of the film’s intended audience will be happy to trot along anyway – the fight choreography is quite good, and if there’s one thing the continuing and truly inexplicable success of the Underworld series shows it’s that you don’t really need anything else. Oh, and guess what? The sequel’s on its way. It’s two and a half thousand years since Sophocles wrote his last play, and only now does the world learn the true meaning of tragedy.

Previous: Brian Butterfield to Get His Own Movie?
Next: Will The Muppets host The 2012 Oscars?