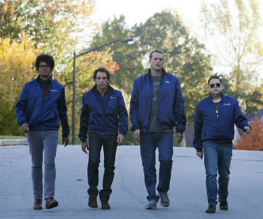 The very first teaser for the Ben Stiller/Vince Vaughn/Jonah Hill/Richard Ayoade effort The Watch was released onto the interwebs a couple of weeks ago, and ever since we’ve been checking under bits of the internet to see where a full trailer might be hiding. Well guess what! We’ve found it! It was poking out from under YouTube! If you think Anchorman: The Same Jokes But We Cost More Now looks good, you are IN FOR AN ACTUAL TREAT.

The tale centres on a gang of regular blokes (always so regular, those blokes) who start a neighbourhood watch mostly out of boredom. UNTIL. Aliens attack. Yep.

Written by Seth Rogan and Evan Goldberg (long-time collaborators on films such as Knocked Up, Superbad, Pineapple Express and Funny People), and featuring the terrifying talents of some of the highest rising stars in Hollywood today, The Watch looks bloody great. It looks like everything Paul could have been, except with Jonah Hill in it, doing the funny stuff we now know he’s actually capable of thanks to excellent \ 21 Jump Street. And considering Richard Ayoade’s stunning directorial debut (that’s Submarine, for those chewing your pens at the back), we reckon it’s pretty unlikely he’d climb aboard this kind of flick without being pretty sure it would be a comedy knock-out.

The Watch is released at the end of August. Are we setting ourselves up for a fall?

Previous: Paramount pays out $18.5 million to injured extra
Next: New tv-spot for Brave shows us that stuff we’ve already seen