Cameron Diaz set to boil bunnies in The Other Woman 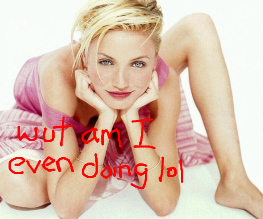 Cameron Diaz is ageing gracefully, isn’t she? Still exceedingly lovely. The same cannot be said for her career, which has been a bit flaccid and impotent over the last few years. Admittedly her role in The Green Hornet was rather good, but it’s a bit of a gamble when deciding on whether to see a Cameron Diaz film, and the odds aren’t in the lovely lass’ favour.

The next project Cameron Diaz is shooting is The Other Woman, in which a lady (possibly Cameron Diaz) discovers that she is the third corner in a love triangle. The splintered and broken leg on a milking stool, one might say. Rather than doing the usual (sensible) thing and breaking up with the cheating bastard, she proceeds to team up with Cheating Bastard’s wife and together they embark on a mission of revenge. It’s sort of like John Tucker Must Die, but with old people.

Cameron Diaz may be joined by the lovely Kristen Wiig, last seen watching Melissa McCarthy taking a shit in a sink in Bridesmaids. The combination of the two taking revenge against the evil male-ocracy is rather titillating, to be honest. Let’s hope Kristen Wiig signs on. Cameron Diaz better bring her A-game.

With Gambit set for immanent release and a couple of other projects on the way, Cameron Diaz is definitely available for hire. Go get her, Hollywood.

Do you have any idea what it’s like being a fembot in a manbot’s manputer’s world?