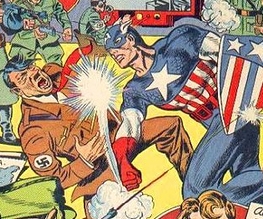 Joe Johnston, the man responsible (and we use the world “responsible” in the same sense as when we say “Stalin was responsible for some pretty awful stuff”) for films such as Jurassic Park III, The Rocketeer and Hidalgo has a new film out next month, The Wolfman.

With any luck, it won’t be a total and terrible waste of everyone’s time. But we digress.

Johnston, as well as helming the upcoming Jurassic Park IV will start shooting The First Avenger: Captain America in June. With America still not exactly the world’s favourite land-grabbing superpower, a super-patriotic super-soldier spurting junk about life, liberty and goddamn apple pie (Note to US: INVENTED IN ENGLAND) might not be the most culturally sensitive thing to do. But seeing as your average yahoo yankee is about as culturally sensitive as reinforced steel, maybe it ain’t all that surprising.

Still, talking to The Hollywood Reporter, Johnston has this to say about the as-yet uncast role: “At the heart of it, it’s a story about this kid who all he wants to do is fit in. This thing happens and he still doesn’t fit in. And he has to prove himself a hero – essentially go AWOL to save a friend. Eventually at the very end, I don’t want to give away to much, but he does fit in.” We also reckon it’ll be kinda cool to have a superhero movie set in WWII.

Just don’t go all jingoistic on us, eh Joe?

Captain America? Where’s Captain bloomin’ Britain, eh? Grumble – preferably about the weather – in the box of crushed imperialism below

Previous: Preview: The Boys Are Back
Next: Webb confirmed for new Spider-Man