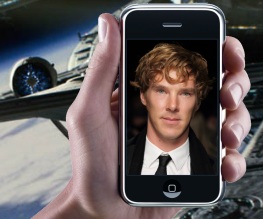 Benedict Cumberbatch has revealed that he won the role of the villain in J.J. Abrams’ forthcoming sci-fi sequel Star Trek 2 with an audition he filmed on an iPhone.

Talking to the New York Times, the star of Sherlock and The Hobbit admitted that he’d been called to audition whilst spending Christmas in Gloucestershire and couldn’t find a more professional way to send the director his pitch. So he holed up in a friend’s kitchen and recorded it himself, because he’s brilliant and we love him. Abrams (who was also on holiday at the time, making the whole thing a little bit convoluted and pointless) later called the video “one of the most compelling audition readings [he]’d ever seen”.

Cumberbatch is still staying relentlessly tight-lipped on the subject of his character in the sequel to Abrams’ critically acclaimed Star Trek reboot, which hit cinemas back in 2009. We couldn’t be more excited if he’d just beamed all our clothes off.

Previous: Prometheus will NOT be edited to snag a lower certificate
Next: Top 10 Versus Films