Danny Boyle’s new Trance trailer for not for the squeamish 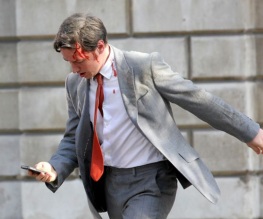 Following the release of this trippy poster for Danny Boyle’s upcoming Trance a few weeks ago, fans will be pleased to hear that a new trailer has been released. It ain’t pretty. Be advised: you might want to wait until the cinema rather than viewing the trailer below, as it may remove some of the shock factor.

For those not in the know, the film stars James McAvoy as an art boffin who gets caught up in a heist in London and is then interrogated by his fellow gang-members when the precious painting goes AWOL. Expect some psychological Danny Boyle style horror, with a bit of torture and mind-bending cinematic montages. The film is set for release on 27th March.

Right if you want to watch it, go ahead. It’s not that bad really, but you have been warned.

Well, did you watch it? What did you think? The bit at the end with the head was pretty disgusting wasn’t it? Never seen Vincent Cassel like that before, have you? LET US KNOW