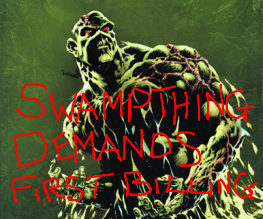 DC Comics are looking to supplement their planned Justice League movie in 2015 with another Avengers-style mass team-up. Guillermo del Toro (Hellboy and the forthcoming robotacular Pacific Rim) has confirmed that he’s working on pulling together DC Comics’ most magical and occult seat-fillers to fight the forces of darkness and remind people that they have other characters than Batman.

Currently titled Heaven Sent, the film will bring together some of the best known DC Comics characters. Only joking! Some brief bios on the pasty and unloved members of the proposed team;

Deadman: A pissed-off ghost
The Spectre: He’s God, apparently
Swamp Thing: Exactly what it says on the tin
Phantom Stranger: Egon Spengler from Ghostbusters
John Constantine: Hey, I actually know this guy!
Zatanna: Not to be confused with Zatara
Zatara: Not to be confused with Zatanna
Sargon the Sorcerer: He’s white, but he wears a turban, which is suspicious
Etrigan the Demon: Merlin (yes, that Merlin) shoved him inside some guy called Jason

So there you have it. DC Comics’ finest. The guys who couldn’t get in to the Justice League (except for Phantom Stranger, who was the Justice League’s butler or something). Guillermo del Toro can usually be counted on for making a decent movie, but this whole enterprise seems like an ill-advised venture. The problem with an ensemble superhero cast (as The League of Extraordinary Gentlemen discovered the hard way) is that there’s no time to develop the characters and make you care what the hell happens to them. Prove us wrong, del Toro!

Avengers Assemble avoided this difficulty by establishing the characters in their own separate movies, but DC Comics is hardly going to spring for a Swamp Thing solo flick, are they?

Although we like the idea of a more supernatural superhero film, perhaps Heaven Sent is a spandex thong too far. How about testing the water with a Deadman film first, DC Comics?

Nine Hellboys in a room. What could possibly go wrong? Who the hell is in charge over at DC Comics anyway!?