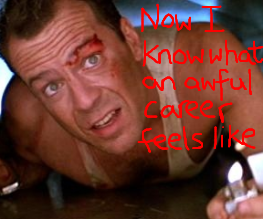 Die Hard 6 has been revealed as actually existing, at least according to Total Film, which revealed that the working title of the film is Die Hardest, a name we refuse to comment on. Die Hard 4.0 and A Good Day To Die Hard were both almost universally panned, so we’re assuming that Fox has some juicy dirt on Bruce Willis if they think they’re going to get him back. His shame was palpable on The One Show. Poor sod.

Die Hard 6 is being written by Ben Trebilcook, almost a complete non-entity, although IMDb informs us with their fascinating obsession with non sequiturs that Mr Trebilcook…

This sounds like the man needed to get the Die Hard series back on track. Talking to Total Film about getting his Die Hard 6 script into production, Mr Trebilcook said:

“There are many hurdles to leap yet and two of those are called Bruce Willis and [producer] Alex Young. There’s the possibility producers might go back and find find some other source material to base the next one on, like they did with the first and second. Mine though, I feel it could be the Rocky Balboa of the Die Hard franchise.”

Considering that the first Die Hard set a new standard for action films, perhaps a better goal to shoot for would be making the, uh, Die Hard of the Die Hard franchise?

Poor Bruce Willis. We all know how good an actor he is when he’s given a good role, but Fox just keep shoving him inside that elevator shaft.

Does Die Hard 6 seem like a good idea to anyone? What were your thoughts on A Good Day To Die Hard? Let us know below!